The AEK-971, or Avtomat Experimental Koksharov-971, is a Russian-made selective-fire assault rifle designed by Sergey I. Koksharov in the 1970s at the Kovrov Machinebuilding Plant in Kovrov, Russia. The rifle was designed for the Russian Army's "Abakan" test trial in the 1980s to replace the AK-74 with a more accurate and modernized assault rifle.

Despite failing the Army's trial, it went on to be produced for Russian police forces and for export. It fires the 5.45x39mm round, fed from a standard 30-round magazine, and is compatible with all magazines used by the AK-74 model. It fires at an approximate 900 rounds/minute rate with an effective range of 400+ meters.

"Modern Russian assault rifle equipped with recoil damper that enables stable handling during fully automatic fire. After years of development, the AEK-971 is now the standard assault rifle of the Russian army. "
— In game description.

The AEK-971 is a weapon featured in Battlefield: Bad Company.

The AEK-971 is the standard issue rifle of both Russian and Serdaristani soldiers. It is probably the most common weapon in the game - especially in the first few missions - making ammunition easy to come by, though it cannot be found during Ghost Town where the AUG replaces it. It is a decent replacement for the default M416 as its sights are more open, but its stats are exactly the same. It also comes equipped with a GP-30 with 40mm grenades.

The AEK-971 is issued as the default assault rifle to the Russian Assault Kit. Its US Army counterpart is the M416 and its MEC counterpart is the AUG A3. Like all assault rifles in the game, it has 50 rounds in each magazine and the player will have 150 rounds in reserve. It will have the GP-30 as its grenade launcher with 8 grenades. It has very average stats, balanced between moderate power, moderate fire rate and mediocre accuracy, as well as open sights. It can kill in about 8-10 shots.

The AEK-971 in Battlefield: Bad Company at Crossing Over in Conquest mode

The AEK-971 is a weapon featured in Battlefield: Bad Company 2.

The AEK-971 Vintovka is no longer the standard weapon for Russian infantry, unlike in the previous game, having been replaced in that role by the AN-94. Instead, it is primarily found in the hands of the Latin American Militia. It can be found either with iron sights or a Red Dot Sight. The version with the Red Dot Sight can be found as a collectible in Upriver, underneath the destroyed bridge.

The AEK-971 Vintovka is the first assault rifle issued to the Assault kit. It is nearly the same as the M16A2 in terms of stats. It has 30 rounds per magazine. It has medium firepower and decently low spread. The recoil is very low for its rate of fire, but is enough to throw off the player's aim beyond medium range. But, short controlled bursts can make the gun deadly at long range. The iron sights are very open, but the recoil pattern makes the gun move back and forth in first person, and resettles very slowly, meaning continuous fire leaves the player with nothing to rely on for aiming besides their eyes.

For the iOS edition, AEK-971 is the primary weapon for both the Russians and the Latin American Militia. It has a 30 round magazine and 120 in reserve. Despite it being an assault rifle, it doesn't have an under-barrel grenade launcher. 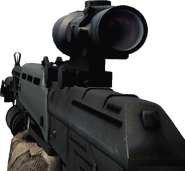 The AEK-971 Vintovka with a 4X Rifle Scope on the multiplayer map Laguna Presa.

The AEK-971 is a weapon featured in Battlefield Play4Free as a purchasable weapon for the Assault Kit. It is one of the most common weapons seen in games due to the high damage and decent accuracy, as well as being one of the first fully automatic assault rifles in the game. The AEK-971 has above-average stats and performs well in close to medium range engagements.

to have forever with credits. It can also be bought for 69

for a month with Play4Free Funds.

Detailed render of the AEK-971.

"The AEK-971 was developed as a possible successor to the AK-74 series of Assault Rifles and features a unique recoil reduction system. The AEK-971’s high rate of fire makes it excellent in close quarters but difficult to control. Shooters should switch to Semi-Automatic or 3 Round Burst for longer ranges."
— Battlelog description

The AEK-971 is a weapon featured in Battlefield 3. It has somewhat changed in appearance compared to past counterparts. It now has a folding wire stock and a different handguard,(due to it being modeled on the production version instead of the prototype) with also an all black finish. It has a high rate of fire with open sights and moderate recoil. The reload animation of the AEK-971 is nearly identical to the AN-94, with the player hitting the magazine release with the new magazine.

It is seen widely during the campaign used by the Islamic Republic of Iran and PLR, and is the starting weapon for Dima in Kaffarov after he opens the weapons cache, it can be found with a variety of optics and last seen in The Great Destroyer.

It can rarely be found in the mission Hit and Run. It is most commonly found with a Tactical Light, but can also be found with a Kobra or PKA-S.

It is the fourth Assault Rifle unlocked at 60,000 Assault points. It has three firing modes; semi-automatic, burst and fully automatic. The weapon's very high rate of fire makes it most effective at close range, and has the lowest vertical recoil of all vanilla (pre-DLC) assault weapons. However, the high and unpredictable horizontal recoil combined with the high first shot recoil can make fully automatic fire difficult at medium to long range. The high rate of fire also causes the weapon to recoil and come off target rather quickly. This high rate of fire also makes it easy to empty the magazine quickly even on individual targets.

The AEK-971 also supports the Underslung Rail attachment which can be used to attach the M320 grenade launcher, which conjuncts into the GP-30. However, the rail cannot fit the M26 MASS shotgun to the rifle. This is because of its larger size than the M320.

The AEK-971 is a weapon featured in Battlefield 4. It's appearance and mechanics are very similar to its counterpart in Battlefield 3. The firerate remains at 900 RPM, making the AEK-971 the second fastest-firing assault rifle right behind FAMAS, thus being an excellent choice at close range but requiring shorter burst when engaging targets at medium and long ranges. The iron sights are unchanged from Battlefield 3. As opposed to its Battlefield 3 variant, the AEK-971 now has a green handguard as in Bad Company, and a dark brown magazine similar to the AK-12. It can mount an underbarrel grenade launcher but not the M26 MASS.

The AEK-971 can be found as a collectible in Tashgar. It is equipped with a PKA-S, Magnifier, Heavy Barrel, and Potato Grip.

The AEK-971 unlocks the Russian attachments, and can only acquire the US and Chinese variants through battlepacks.

Bf4 aek and scope.jpg
The AEK-971 attached with a scope.

The AEK-971 as seen in the Gamescom Livestream