Air Superiority is a gametype featured in the Battlefield Series. 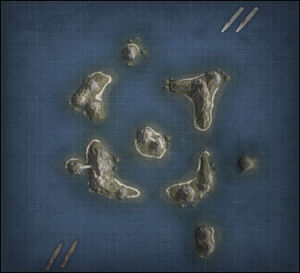 Air Superiority was first introduced in Battlefield 1943. It was originally locked at the game's release, requiring that the community achieve 43 million kills per console. A week-and-a-half after launch, these requirements were met and the mode became available. The mode, however did receive mixed reception mainly because of the gameplay issues and lack of maps.

At the center hill of the map, there is a flag located beside a bunker and radio tower there. The minimap shows players the capture area of this flag. Since the majority of maps are out-of-bounds, players will only have nine seconds until death after bailing out of their airplane.

Entry into the enemy's aircraft carriers is allowed, but players will not gain any points for killing any enemies on board.

The only objective in the Air Superiority mode is to eliminate the enemy aircraft and secure the air above the map. In order to take the control of the air the team must have more players in the air than the opposite team. Leaving the aircraft carrier or the plane once you're away from the carrier results in death within 9 seconds. The team which runs out of tickets first loses the match.

Air Superiority returns as one of the two new multiplayer gamemodes in the End Game expansion for Battlefield 3. It is very similar to its predecessor, albeit some small changes.

This variant of Air Superiority features two teams of up to 24 players must take control of three control points in the map by clearing the skies of any enemy fighter jets nearby.

The control points, all called "Control", are white, indestructible dirigibles floating in one spot. The flags can be captured in an environment up to 260m, wide enough to accommodate circling jets. As with regular Conquest, having more teammates allows for even faster capture, while nearby enemies can negate or retard the capture rate. Control spots capture at a rate similar to the flags in Conquest Domination and Scavenger.

The United States Marine Corps have access to F/A-18E Super Hornet fighter jets, while the Russian Ground Forces have access to SU-35BM Flanker-E fighter jets. Players cannot bail out from their jets. "Warning: Ejection Seat Malfunction" will be displayed if a player attempts to bail out.

On PC servers with large player counts, there may not be enough jets for all players. Those waiting to respawn must wait for teammates to be killed.