For the similar carbine featured in Battlefield Vietnam, see CAR-15
The M4 Carbine is a firearm tracing its origins to a variant of the CAR-15 which is based on the M16 and all based on the original AR-15 made by ArmaLite. It is a shorter and lighter version of the M16A2, with 80% parts commonality with the M16A2. The M4A1 has selective fire options including semi-automatic and full-auto. It fires the 5.56x45mm NATO round, and is suitable for C.Q.C. Although the M4 has less effective range than the longer M16, many military analysts consider engagement with a non-specialized small arm above a range of 300 meters (330 yd) to be unnecessary. It is effective at ranges of 150 meters (160 yd) or less and has a maximum effective range of about 500 to 600 meters (550–660 yd).

"The M4 is a lightweight version of the M16 and fires the same type of ammunition. It has similar handling and accuracy but does less damage. It comes equipped with a red-dot scope."
— In-game description

The M4A1 in Battlefield 2

The M4 Carbine in the last mission in Battlefield 2: Modern Combat. (Xbox 360)

The M4 Carbine's iron sight in the scope in Battlefield 2: Modern Combat. (Xbox 360)

The M4A1 is a weapon featured in Battlefield Play4Free and is a purchasable elite assault rifle for the Assault Kit. It features high damage and a 20-round magazine. However, the weapon suffers from a decreased range and a more moderate recoil, as well as a cost of up to 1249

for unlimited use. The weapon's extra magazine and decent damage make it excel at close-range infantry-based maps like Sharqi and Basra, but it's still efficient on longer range maps like Karkand.

The M4A1 in Battlefield Play4Free.

Render of the M4A1
Añadir una imagen a esta galería

"Essentially a shortened version of the M16, the M4A1 Carbine traces its roots to weapons designed for US Special Operations Command (SOCOM) during the Vietnam War. The M4A1 variant is capable of Automatic fire and includes rails that allow the user to equip a large number of accessories. The carbine has seen heavy use at the frontlines of Iraq and Afghanistan in close quarters and urban environments."
— Battlelog description

The M4A1 is a weapon featured in Battlefield 3. It was first seen in the Fault Line Trailer.

The M4A1 is the default carbine for the United States Marine Corps Engineer kit. It is capable of fully-automatic or semi-automatic fire, has low recoil, making it very accurate at medium and short ranges. It can do a fairly high amount of damage due to its fast firing speed.

The weapon's main strength is its very high rate of fire which is one of the fastest of all carbines, but it is also one of its weaknesses as the rate of fire is so fast that it's hard to actually fire the gun in controlled bursts, as it might make you accidentally fire an extra round or two which by then the recoil already kicked the weapon out of aim so more ammo may be wasted and many shots may miss.

"Visually and mechanically similar to the M16, the M4 Carbine was developed to replace pistols and sub-machine guns at the front lines. The M4 is capable Semi-Automatic and 3 Round Burst fire and is equipped with accessory rails for end user customization. The rifle has largely replaced the M16A2 previously in use by the US Marine Corps. "
— Battlelog description.

The M4 is a weapon featured in Battlefield 3 and is unlocked upon obtaining a 40,000 Engineer score. It has the same stats as the M4A1, but fires in either three-rounds burst or semi-automatic. After a recent patch, the M4 has more vertical recoil and less horizontal recoil than the M4A1. The M4 can be used by both factions and share its unlocks with the M4A1.

One thing to notice, is that the M4 has a much tighter bullet spread than it's automatic counterpart. While not significantly important within burstfire ranges, it can be useful on larger maps where semi automatic fire can be required. In addition, when a heavy barrel is added, the M4 is the most accurate carbine, beating both the SCAR-H and ACW-R. 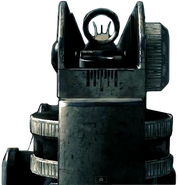 The M4A1 as seen in the Fault Line trailers

M4A1 without any attachments

The M4A1 while sprinting; Pre-Alpha

The M4A1 being fired from the hip; Pre-Alpha

The M4A1 with a Red Dot Sight equipped in final build gameplay.

The M4 is a weapon set to appear in Battlefield 4. It was first seen in the "Fishing in Baku" Reveal Trailer being used by Pac and later in the Angry Sea gameplay trailer. It is seen with an attached a US Red Dot Sight. The M4 was confirmed to appear in Multiplayer during the Gamescom Convention in Germany.