"The Brisfit" is a Codex Entry featured in Battlefield 1. Detailing information about the Bristol F2.B, it is unlocked by obtaining ten kills with Attack Planes. 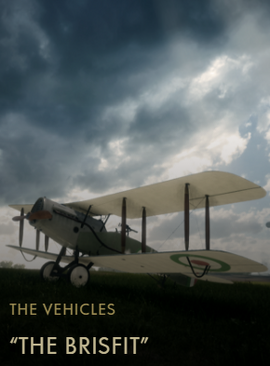 The F2.B, also known as the "BRISFIT", was the main 2-seater reconnaissance plane of the Royal Flying Corps. More than 5000 were built and it often carried a Lewis gun on the rear cockpit mounting. It was a strong and agile plane capable of maneuvering with single-seat fighters.

The pilot and the observer were placed close together allowing for easy communication, and some Bristol crews were known for never refusing battle.

By the time the war ended in late 1918 the Bristol had accounted for over 148 enemies.

Retrieved from "https://battlefield.fandom.com/wiki/%22The_Brisfit%22_(Codex_Entry)?oldid=343281"
Community content is available under CC-BY-SA unless otherwise noted.