The Smith & Wesson Model 327 TRR8 is an American double-action revolver chambered for the .357 Magnum cartridge. It has a non-reflective matte black finish, and is capable of mounting optics as well as underbarrel flashlights and lasers. Unlike most other revolvers, it has a capacity of eight rounds.

32 + 8 rounds
"A hard-hitting reliable revolver, the .357 RS is a favorite of law enforcement. The .357 RS has more rounds in the cylinder than other revolvers."

The .357 RS is a revolver featured in Battlefield Hardline. It is a purchasable sidearm for the Law Enforcement Mechanic.

The .357 RS performs similarly to the .44 Magnum, but is less powerful at long range, gearing it more towards closer engagements. It does, however, possess the highest cylinder capacity out of all of the Mechanic's Revolvers at eight rounds, allowing the player to fight longer before having to reload the weapon. 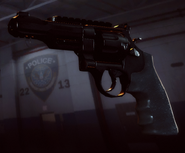 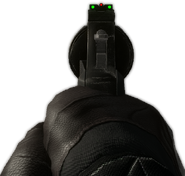 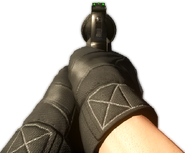