The Model 642 is an American double-action snub-nose revolver made by Smith & Wesson as a part of their Centennial line of revolvers. It weighs about fifteen ounces unloaded and uses an internal hammer mechanism, allowing it to be easily concealable. The 642 has a barrel length of just under two inches long and is chambered in .38 Special.

The Model 642 appears in Battlefield Hardline as the .38 Snub.

The .38 Snub is a weapon featured in Battlefield Hardline. It is the default sidearm for the Mechanic kit. Similar to the Sawed-off Shotgun, the weapon has no rails and has a very small frame, and is therefore unable to mount attachments. The only attachment it can use is its default Laser Sight.

Compared to the rest of the Mechanic's Revolvers, the .38 Snub has the lowest damage, smallest ammunition capacity (tied with the .410 Jury), and no attachments can be used (besides the Laser Sight). However, it has the significant advantage of having a high semi-auto firecap, allowing it to be very effective at finishing off wounded enemies or fighting in close quarters combat situations. The user should keep its small cylinder capacity of five rounds in mind, however, as the cylinder can be fired off in less than one second. 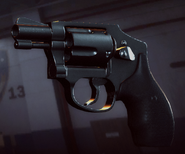 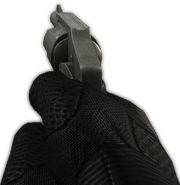 The .38 Snub as it appears in the Battlefield Hardline: 6 Minutes of Multiplayer Gameplay Trailer

Aiming at a Laser Tripmine.