The Taurus Judge is a Brazilian revolver designed for personal protection introduced in 2008, and is reportedly Taurus International's best selling firearm. The Judge has a five-round capacity and is chambered for both .410 bore shotshells and the Colt .45 round, although it was designed for use with shotshells.

The Public Defender series is a snub-nose version of Judge, utilizing a smaller barrel and hammer for usage as a concealed carry firearm.

The .410 Jury is a revolver featured in Battlefield Hardline as an unlockable sidearm for the Mechanic kit. The .410 Jury is unlocked by completing the assignment "Mechanic Assignment 2". Once unlocked, it can be used with both factions. It is equipped by default with a Laser Sight.

Out of all of the Mechanic's available revolvers, the Jury is tied with the .38 Snub for having the lowest cylinder capacity at five rounds. Unlike all of the other sidearms, however, the Jury does not fire a bullet, instead using .410 Shotshells as ammunition. This gives it a significant edge in close quarters as it is effectively a semi-automatic shotgun.

The .410 Shell has a unique damage model compared to the the 12G shotguns, doing 25 damage per pellet, which is the second highest pellet damage behind the Double-Barrel Shotgun. The Jury will fire five pellets with each shot, allowing a one shot kill if all pellets hit within 25 meters. The .410 pellets can also travel farther before doing minimum damage than any other shotgun with buckshot.

However, the Jury's pellet spread is not very tight because of its short barrel and also has very heavy vertical recoil. This makes it much less accurate at range compared to the .44 Magnum and .357 RS, though it can still capably hit enemies within medium ranges. The Jury also suffers from a long reload of just over four seconds. Coupled with its very small cylinder capacity, this causes the .410 to struggle against large groups of enemies.

Overall the .410 Jury is an extremely effective close range sidearm, useful for Mechanics fighting in close quarters. Compared to the .38 Snub, which is also only effective at close ranges, the .410 Jury fires and reloads much slower but deals considerably more damage than the Snub. Like the .38 Snub, the .410 Jury cannot unlock any Muzzle attachments, meaning its recoil cannot be improved. However, it can unlock pistol Optic and Accessory attachments. The Laser Sight, which is unlocked for the Jury by default, can help tighten the pellet spread slightly. 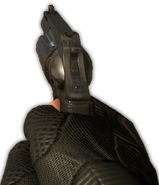