The Taurus Model 44SS6, also known as the Taurus Model 44 or simply T44 is a revolver produced by Forjas Taurus of Brazil and Taurus International Manufacturing Inc. in the United States. The Model 44SS6 is a stainless steel revolver chambered in the .44 Remington Magnum round and has a 6-inch barrel that is ported near the front sight for recoil compensation. The Model 44 bears much resemblance to Taurus' well-known "Raging Bull" series of revolvers, but has a different grip and lacks the dual lockup cylinder of the Raging Bull series.

Although not adopted by any military force, the Model 44 is available for purchase by civilians and military personnel alike.

0.3
15.0
"A .44 Magnum, the most powerful handgun in the world, this particular model features a ported barrel, a compact frame for easy carry, and of course, a round that will blow your head clean off. The .44 Magnum is the most powerful available side arm, but the recoil and weight of the weapon makes fast follow up shots extremely difficult."

The .44 Magnum is a large-caliber revolver that is featured in Battlefield 3. It features high power, high accuracy, and recoil, with a lower rate of fire, and sharp and easy to use iron sights. It has a 6-round capacity, and reloads with a speed-loader.

The .44 Magnum is used by Solomon in the singleplayer campaign, as he is seen using it in Semper Fidelis, Uprising, and The Great Destroyer. The player, however, has no interaction with the gun in the campaign.

The .44 Magnum is unlocked upon reaching level 36 in multiplayer, while an alternate version, the .44 SCOPED, has a mounted 3.4x magnification PK-A that is unlocked once reaching level 44. The .44 Magnum is an incredibly powerful side arm, requiring only two shots to the torso or one shot to the head up to about 20 meters to kill. At ranges of 50 meters, it will require about four shots or fewer. The scoped version can be useful for players who wish to still have a mid-range weapon when equipping a shotgun or PDW that is better suited for close range. The Magnum may also be useful to some players for the ability to destroy explosives.

Versus the MP-412 REX, the .44 Magnum has a higher damage, recoil, bullet velocity, longer one- or two-shot kill range, and hipfire accuracy but the MP412 has a faster reload time by almost half a second, less recoil, and a faster fire rate that makes it edge out over the .44 Magnum at close range for taking down opponents quicker. However, the .44 Magnum's increased bullet velocity allows it to take down targets faster at mid to long range. The .44 Magnum performs better than all of the semi-automatic pistols in close to mid range in dispatching threats, and no longer suffers from its original low fire rate at ranges past 50 meters.

In the 1.04 Patch, the .44 now has an increased rate of fire. A similar change has also been applied to the M1911. The patch also gave the gun a new firing sound and its damage was slightly buffed, especially at longer ranges.

Also, much like the DICE exclusive M1911 S-TAC pistol variant, the .44 Magnum has a suppressor variant with a Laser Sight only available to DICE employees for use in kits, however picking up a dead employee's kit will allow the use of the suppressed .44 Magnum with its laser. This weapon was first spotted on a few frames of the Donya Fortress trailer.

The .44 Magnum at Noshahr Canals in Conquest while being fired. 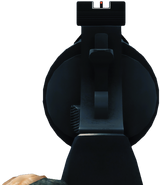 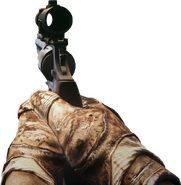 Side render of the .44 Magnum.

The .44 Magnum model in various angles.
Add a photo to this gallery

The .44 Magnum is a sidearm featured in Battlefield 4. It is the second to last sidearm to be unlocked in multiplayer, requiring 51,000 pistol score.

The Magnum features the highest damage and fastest bullet velocity of all sidearms, but also has the lowest rate of fire, the second slowest reload time, and is tied with the other three revolvers with having the fewest bullets per reload. It is one of three sidearms that fires the .44 Magnum round, the others being the DEagle 44 and the Mare's Leg, allowing the weapon to kill in a single headshot within 12.5 meters, and only needing 2-3 shots to kill in all other circumstances.

Compared to the other high damage pistols, the .44 Magnum is the one most geared to towards accuracy and longer range engagements. The Magnum's spread values both from the hip and while ADS are very low, and its high muzzle velocity allows the round to reach the target very quickly. Due to its low fire rate, however, the Magnum can potentially struggle in close quarters if the player doesn't get the first shot off; put plainly, the Magnum can out damage most weapons, but it can't out shoot them without a headshot.

The weapon's other primary downside is its rather significant vertical recoil, which it shares with the MP-412 REX and the Unica 6, requiring the player to accommodate for the muzzle lift in order to fire successive shots accurately. Despite this, the weapon still functions as a very good finisher in close quarters, capable of killing any player hit by at least two shots from any Assault rifle with one hit.

With regard to attachments, the Magnum can benefit from the addition of a Laser Sight to further improve its spread as well as its abilities in CQB situations. A Heavy Barrel will increase the weapon's accuracy even further, making it a good option if the player has access to the Veteran 3x Scope. However, the Heavy Barrel will further increase the Magnum's already high recoil, which may not be ideal for some players. The Muzzle Brake will have the opposite effect, dampening the Magnum's vertical recoil, but causing a significant increase in spread with successive shots; as its horizontal recoil cancels itself out, the Compensator is largely unnecessary for the Magnum. A Flash Suppressor or no barrel attachment will suffice if the player has no wish to negatively impact the weapon. 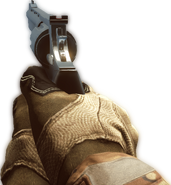 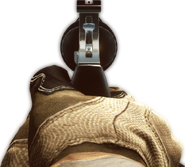 Ejecting cartridges
Add a photo to this gallery

30 + 6 rounds (SP)
"The .44 Magnum is a powerful 6-shot high-caliber revolver. Hard-hitting, the .44 is good at close range, as the high recoil can be difficult to manage when firing a string of shots. Ask yourself one thing - do you feel lucky?"

The .44 Magnum is a revolver featured in Battlefield Hardline.

The .44 Magnum is unlocked upon reaching Expert Level 8, along with the .40 Pro, .410 Jury, and Bald Eagle. It can then be equipped by the player for any of the singleplayer episodes.

The .44 Magnum also appears to be Tony Alpert's weapon of choice, drawing it on Nick Mendoza and Marcus Boone after their capture during Sovereign Land, although he never uses it in combat.

The .44 Magnum is a purchasable sidearm for the Criminal Mechanic kit. The Magnum does the highest damage and has the longest range out of the revolvers available, but fires slightly slower than the others and has significant recoil. It is closest in performance to, and the same price as, the .357 RS: the Magnum has better range, but has only six rounds in the cylinder compared to the .357 RS' eight.

Tony Alpert with the .44 Magnum
Add a photo to this gallery

Retrieved from "https://battlefield.fandom.com/wiki/.44_Magnum?oldid=362892"
Community content is available under CC-BY-SA unless otherwise noted.