12 Gauge Flechette is the first unlockable ammunition type for shotguns (except the M26 MASS, for which it is the third) in Battlefield 3. The rounds are stated to have increased penetration capabilities for shotguns, allowing a user to easily penetrate light cover and even other players. Though inflicting less close-range damage than 12 Gauge Buckshot, it inflicts more damage at longer ranges due to its decreased spread and lower dropoff.

Flechette ammunition was also a special pre-order bonus that is a part of the "Physical Warfare pack". It is available for use in the exclusive unlock DAO-12 shotgun that comes as a bonus in the pack as well (a Day 1 unlock, not an exclusive unlike the Type 88 LMG or Flash Suppressor). This ammunition is unlockable and can be used in other shotguns, but those who were fortunate enough to have this bonus will have had it from the start online. As of March 2012, the Physical Warfare Pack is unlocked free to all players. 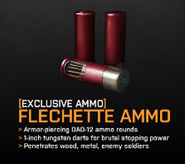 Flechette rounds as seen in the poster for the Physical Warfare Pack.

12 Gauge Dart is a shotgun ammunition type featured in Battlefield 4. It is available to all shotguns with the exceptions of the Shorty 12G and the USAS-12 Battle Pickup.

Flechette darts have considerably less close-range stopping power than buckshot, but they extend the effective range of the shotgun, as they have a longer drop-off. Additionally, they have a higher minimum damage value than buckshot, and travel at a higher velocity.

Flechette ammunition offers increased penetration through materials that will generally defeat buckshot, such as plywood, wood boards, cardboard boxes, and sheet metal. They can also penetrate multiple enemies, useful in close quarters. It is also effective against players that have body armor (via the Defensive Upgrade Path) equipped.