A 12 Gauge Frag round is designed to burst on impact, littering the target area with shrapnel. Frag rounds are currently being considered for military use. 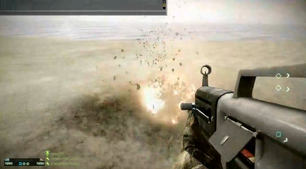 12G Frag Rounds can be found on the collectible TOZ-194 when equipped with slugs. It is the only shotgun in singleplayer to use the 12G Frag.

DICE-Boom is available only to employees of DICE for shotguns, with the DICE logo used as the specialization icon. The round creates large craters comparable in effect to C4.

The frag rounds explode on impact, causing a grouping of several small explosions on target. In Multiplayer, this not only suppresses the enemy, but also leaves the opposing player in disarray as it is difficult for them to ascertain the direction of incoming fire. Players not under fire from the frag rounds however, can easily locate the shooter, as Frag Rounds produce a very large tracer, almost akin to that of the IFV main gun.

The addition of slight splash damage makes these rounds very effective for suppressing and killing grouped enemies, or enemies popping in and out of cover. It is also possible to kill enemies just behind cover by shooting the floor by them due to the splash damage. One example of this is on Seine Crossing, along the alley between the RU Deployment and Back Streets, where the splash damage and spread can be very useful.

Two direct hits from frag rounds will kill an enemy in Normal mode at any range, although at range the spread of the rounds makes it hard to pull off a kill, as well as the fact that frag rounds are some of the slowest traveling rounds in the game. As an explosive weapon, it can set off other explosives such as anti-tank mines or C4.

The blast damage from frag rounds can kill the user if shot on the ground or a wall close to them. Three explosions will kill a player at 100% health, and the death will be considered a suicide. Frag rounds also have the ability to damage armored vehicles, including IFVs and MBTs. The blasts can penetrate through the windows on light armored vehicles such as the HMMWV.

12 Gauge Frag is a shotgun ammunition type featured in Battlefield 4.

Frag rounds do the least impact damage of any shotgun rounds, but deal considerable explosive damage within a small blast radius. If the explosion is within 2 meters of an enemy, four explosions will be enough to kill an enemy, while impact damage from direct hits will also contribute.

However, it has a very low muzzle velocity, at only half the speed of slugs, as well as heavy drop over range. Impact damage at long range is also very low. This means it is best used at medium range against groups of enemies, especially if they are behind cover or destructible objects where the splash damage will be advantageous.

The USAS-12 Battle Pickup is always loaded with 12G Frag ammunition, with the same ballistic performance as semi-automatic shotguns.

Retrieved from "https://battlefield.fandom.com/wiki/12_Gauge_Frag?oldid=257699"
Community content is available under CC-BY-SA unless otherwise noted.