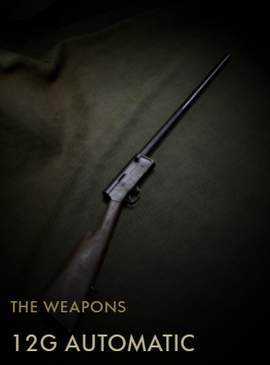 Popularly called the "Humpback" due to the distinctive design of the receiver, this semi-automatic shotgun used a long recoil mechanism which was more commonly featured on automatic cannons.

An American design from 1898, it was the first mass-produced semi-automatic shotgun in the World. Versions of it were manufactured in the US and Belgium, and it was used as a trench clearing gun during WW1 alongside the more traditional pump-action shotguns. The 12G was a reliable, robust weapon which was produced from 1902 all the way up until the year 2000, and it has seen worldwide use by military, law enforcement and sports shooters.

Retrieved from "https://battlefield.fandom.com/wiki/12g_Automatic_(Codex_Entry)?oldid=343120"
Community content is available under CC-BY-SA unless otherwise noted.