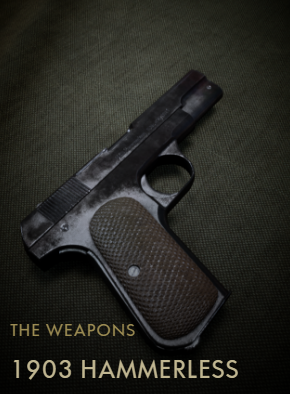 The American manufacturer was looking for a pistol that could be successful as the Belgian-produced pistols and approached the American designer for a license to produce a similar pistol in the US in .32 caliber. The designer took his 1902 design for a 9mm pistol and modified it for .32 caliber and a smaller size, and the next year American production began of what was internally called the Model M, or the 1903 Pocket Hammerless Pistol.

Just like the larger Belgian model, the 1903 Pocket Hammerless was a reliable, easy-to-use pistol of great quality. It was the first pistol ever with a grip safety, and despite being called hammerless it actually has a hammer which is simply hidden under the slide to make it less likely to snag when pulled from a pocket.

During WW1 over 24,000 of the 1903 Pocket Hammerless were ordered by the Belgian Army, 200 by the US Navy and an unknown number by the British Empire. Many were also privately purchased by US soldiers during WW1 to keep in their trench coat pocket as extra firepower. Between the wars, many gangsters favored the 1903 Pocket Hammerless due to its handy size, and General Patton famously carried one with ivory grips in WW2.

Retrieved from "https://battlefield.fandom.com/wiki/1903_Hammerless_(Codex_Entry)?oldid=329317"
Community content is available under CC-BY-SA unless otherwise noted.