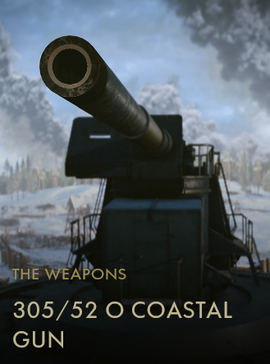 The Estonian archipelago was guarded by the mighty 30,5 cm batteries at Zerel, used to fight off the German attack during Operation Albion. First in service in 1910, they were the most powerful heavy guns of the Russian Navy and were often used on battleships, such as the pre-dreadnought Slava that guarded the straits. With a maximum range of 12,4 miles (20 km), the 624 inch long (15.8 m) and 50-ton heavy guns held the German fleet at bay and dispersed the German dreadnoughts with 1.5 shots per minute. It was only after the gun crews had finally abandoned their positions that the German navy could safely approach.

Retrieved from "https://battlefield.fandom.com/wiki/305/52_O_Coastal_Gun_(Codex_Entry)?oldid=352961"
Community content is available under CC-BY-SA unless otherwise noted.