The 37/95 Scout is a Codex Entry featured in Battlefield 1. Describing the 37/95 Scout, it is unlocked upon riding in cars for five minutes. 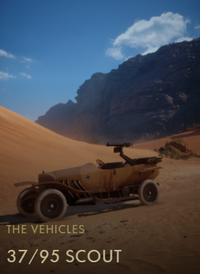 In its day, it was considered the most powerful production automobile in the world. It had a 9.6 liter engine and a four-speed gearbox that delivered the engine's power to the dual chain-driven rear axle. Records show that its estimated top speed was roughly 110 km/h. The car was used as a staff car for both the Turkish and German forces.

Retrieved from "https://battlefield.fandom.com/wiki/37/95_Scout_(Codex_Entry)?oldid=343288"
Community content is available under CC-BY-SA unless otherwise noted.