5v5 was a squad-based competitive gamemode that was in development for Battlefield V but was cut before release.[1]

The mode was similar to Incursions, a 5v5 competitive mode introduced with Battlefield 1. As the name suggests, the mode revolved around two teams of five engaging in infantry combat on close quarters maps.

Rounds of the 5v5 mode consisted of the following game types:

Lofoten Islands and Provence were designed specifically for the mode, but were instead released in early September with support for small gamemodes - specifically Squad Conquest, Team Deathmatch and Domination. Details of at least one other map, called Al Marj Encampment could be found in the game files. It is scheduled to be released in June 2020.[2]

Allies and Axis teams could, via a majority vote, select a faction doctrine that provided three doctrine-specific bonuses for said team. Doctrines had either an "offensive" or "defensive" rating although the reason for this is unclear. A list of doctrines and their description is show below:

At the start of a round players had 30 seconds to select a class, of which only one of each type could be on the same team. Unlike in the core multiplayer modes which allows Soldier Customization, each class had a set, specific appearance to aid with recognition.[3] There were overall 22 different class appearances.[4]

A list of subclasses, their descriptions and class perks are listed below:

The mode included class-specific weapons and gadgets similar to Incursions, but also unique equipment developed for the mode that were either not intended for multiplayer or had their functions altered for the mode. Some of these items would later be added to Multiplayer, available to the standard four classes. A list of these items is shown below:

The gamemode allowed one tank per team, called in using Squad Reinforcements. The Allies could use either the Staghound T17E1 or Valentine Mk VIII, while the Axis could use the Panzer 38T or Panzer IV.

Players would receive a competitive rank based on their performance in game. The ranks tiers were ordered as Bronze, Silver, Gold, Platinum (Sapphire in some builds) and Diamond.

The mode was developed primarily by DICE LA[7] and was initially announced alongside the Tides of War roadmap released in March 2019, being set for release in June 2019 along with Lofoten Islands and Provence.[8] An updated roadmap from June showed the implementation of the two maps had been pushed to back to August and made no mention of the mode. Despite this updates to the mode continued in the game files until at least three weeks before it was officially announced as cancelled. The mode was officially announced as being cut on August 22nd 2019. 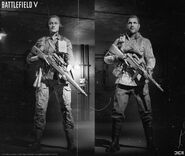 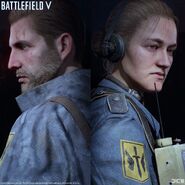 Retrieved from "https://battlefield.fandom.com/wiki/5v5_(Gamemode)?oldid=376458"
Community content is available under CC-BY-SA unless otherwise noted.