Not to be confused with the A-91
The 9A-91 is a Russian made carbine currently in use with Russian police forces. It is a very advanced carbine, designed to accept 9x39mm rounds. It has an effective range of only 100 meters, but at this range the 9x39mm round is clearly superior to both the 9x19mm Parabellum, 5.45x39mm M74 and 5.56x45mm NATO rounds in terms of penetration and stopping power. It can fit optics via a special rail mount fitted on the left of the receiver, and can also fit a large suppressor.

The 9A91 is a weapon featured in Battlefield: Bad Company.

The 9A91 can be found on certain dead MEC enemies in the final mission, Ghost Town. It is very common amongst the MEC troops, but not as common as the AUG.

The 9A91 in Battlefield: Bad Company in Final Ignition in multiplayer.

The 9A-91 Avtomat is a weapon featured in Battlefield: Bad Company 2. It is the first Submachine gun issued to the Engineer kit, requiring no experience points to unlock. It has a 20-round magazine, low recoil, a medium rate of fire and high damage.

Despite having the highest damage of all the SMGs in-game, the 9A-91's small magazine and scarcity of spare ammunition can be a nuisance in battle, though using the AMMO specialization can help in this case. As well, several of the other SMGs outperform it at close range. However, its high accuracy and damage make it a good weapon to use at longer distances when firing in 1-2 shot bursts.

Another weak point of the 9A-91 are its iron sights, which consist of a small front post aligned between two larger pieces. Although not necessarily obstructive, there is no protruding element to them, and only a small distinction between the front post and the other pieces. Hence, some players may want to use the Red Dot Sight or the 4X Rifle Scope.

The 9A-91 Avtomat in Battlefield: Bad Company 2 at Panama Canal in multiplayer.

Reloading the 9A-91 Avtomat.

American Engineer aiming the 9A-91 Avtomat. 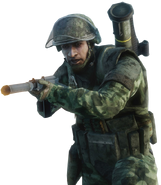 A Russian Engineer wielding a 9A-91 Avtomat. 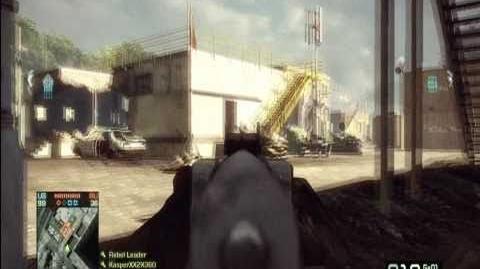 9A-91 Avtomat
Gameplay of the 9A-91 in Battlefield: Bad Company 2 multiplayer at Panama Canal in Conquest mode

The 9A-91 is a weapon featured in Battlefield Play4Free. It fires a special 9mm round which allows it to excel in close quarters combat. Its lower rate of fire allows it to be easier to control during full-auto firing, and it's high damage output allows it to take down enemies quickly.