The 2/9K22 Tunguska (Russian: 9К22 "Тунгуска"; NATO reporting name: SA-19 "Grison") is a Soviet Union/Russian-built self-propelled anti-aircraft vehicle developed by the KBP Instrument Design Bureau in Tula. It has been in service since 1982 and saw combat in the South Ossetia War in 2008. The weapon system was designed to counter any variety of airborne threats, including the American A-10 Warthog, and is armed with eight 9M311-1M ground-to-air missiles and twin 30mm 2A38M autocannons.

The 2K22 Tunguska (referred to as tunguska in the game file) is the mobile anti-aircraft vehicle used by the Middle Eastern Coalition, the MEC Special Forces, the Spetsnaz, and the Rebel Forces. Its USMC/SEALs/SAS/EU and PLA counterparts are the Linebacker and the PGZ-95, respectively.

The 2K22 Tunguska's primary role is to destroy or suppress enemy air assets on the battlefield. It weapon system consists of a set of 2 dual-barrelled cannons as well as anti-aircraft missiles. Its armor is as tough as an IFV and consequently, it can take as much damage.

Its 2 2A38M dual-barrelled cannons fire a large volume of explosive shells with a set deviation value of 0.25. These will overheat after continuous firing for around twenty seconds, and recover after four seconds. This means, with 2 full burst and the trigger is constantly held down, the player will find themselves empty of ammunition. If the player doesn't push the weapon too hard, one will be able to lay down a constant barrage of HE shells at enemies. However, the vehicle has a very bad gun depression, much worse than the Linebacker, making road-killing or trying to back up and firing at the same time the only viable option for nearby infantry. The 2K22 Tunguska is arguably the worst mobile air-defense vehicle to deal with nearby infantry because not only the gun depression presents a problem, its camera is placed at a very inconvenient location, and the player will find themselves being blocked by the J-band tracking radar in front of the turret very often when engaging ground-level targets, including even vehicles, further limiting its ground-attacking capabilities.

Versus vehicles, aircraft of all types are very vulnerable to the 2A38M's shells, and if the player is accurate enough, they will find themselves able to shoot down aircraft even without using missiles. The shells also deal decent damage against light vehicles such as HMMWV and DPVs. Combine with the cannons' high rate of fire, the vehicle can swiftly engage aircraft, light vehicles, and infantry, or laying down suppressive fire. However, against heavy vehicles, the shells deal very little damage, and the vehicle is very vulnerable to the primary weapons of APCs and MBTs. With no dedicated AT weapons on board, the player should avoid fighting with them unless as a last resort.

The secondary weapon of the 2K22 Tunguska are 4 tubes of missile containers that hold 4 9M311 anti-aircraft missiles, with 8 more in reserve. The launcher has an extremely wide set deviation value of 30. The missiles can lock onto enemy aircraft, and can be fired off in decently rapid succession, whether locked on or not. It takes 2 missiles, maximum, to shoot down any type of aircraft. Just like its cannons, while the missiles are deadly against aircraft, they deal very low damage to armored vehicles, requiring multiple shots to kill even an APC. If the player find themselves in too tight a situation, the missiles can be used against infantry and light vehicles, although the launcher's high deviation doesn't help much in scoring direct hits on targets, which is usually necessary considering the missiles' low damage against ground vehicles. The player should only use this tactic when one is very close to the enemy, and the player also need to make sure there are no friendly around due to the missile's decent blast radius. The missiles also fly upward after traveling a certain distance, making surface attacks past that distance impossible.

The passenger stands in the commander's cupola and is completely exposed with no means of shielding oneselves, and is vulnerable to all forms of damage, from small arms fire to artillery strikes. However, the passenger is capable of using any weapons of one's kit, including AT weapons, C4s, and repair tools, which can help increase the effectiveness of the vehicle.

A render of the 2K22 Tunguska.

"Mobile surface-to-air gun and missile system in service since 1982. Developed in response to range shortcomings in the Zu-23 Shilka design."

The 9K22 Tunguska-M is an anti-aircraft vehicle featured in Battlefield 3, issued to Russian forces.

Several 9K22 Tunguskas appear in Fire from the Sky as being used by the PLR to take down the AH-1Z Viper controlled by the two players.

Despite being an anti-aircraft vehicle, the Tunguska's extremely fast-firing autocannons and turret elevation capability make it a useful anti-infantry vehicle as well. The cannons also have remarkable reload times, allowing for an almost endless rain of bullets. It is a perfect vehicle to lay down suppressive fire.

Although it lacks dedicated weapons against ground vehicles, it is capable of inflicting serious damage. In one salvo (about six seconds of sustained fire), tanks can be brought down to 20% health if flanked, but can retain 75% if attacked from the front.

Its US counterpart is the LAV-AD, which is almost exactly the same except for its amphibious capability and wheeled chassis, the latter of which prevents the LAV from turning on the spot like the Tunguska can.

Patches have changed the anti-air vehicles' performance against tanks, at one point mistakenly eliminating damage. Patches have also increased the time and precision required to kill infantry.

Art on the Xbox 360 dashboard.

A high-quality render of the 9K22 Tunguska. 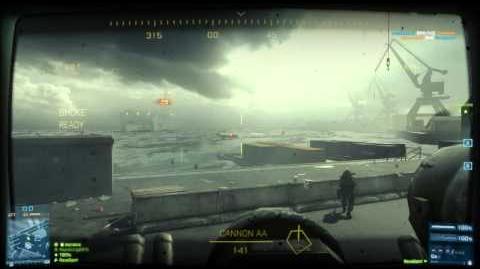 The 9K22 Tunguska is a vehicle featured in Battlefield 4.

In Tashgar, after Tombstone departs from Molina's outpost and eliminates all hostiles outside of it, Recker can drive a 9K22 Tunguska-M, but is rendered useless since its size is too large to fit through the concrete wall. It is equipped with 20mm Cannon, Zuni Rockets, and Fire Extinguisher in the mission.

The 9K22 Tunguska's main role is to provide anti-aircraft fire and suppression. It can also engage light ground targets with ease such as armored vehicles and buggies. The 9K22 Tunguska can be easily destroyed by MBTs, PT Boats or IFVs.

The main armament for the Tunguska is its cannon (all cannons on Mobile AA have the same damage output against vehicles, regardless of faction). Each shot type, however, has a different niche with individual stats -- 20mm shells do not have as much damage output as 30mm, and fire at 2000 rounds per minute (33.3 RPS) versus the 600 rounds per minute (10 RPS) with heavy shells. 30mm fires at a slower rate but does higher damage against close range targets and vehicles. Overheat time is also important to note: 20mm will overheat after six seconds of continuous fire, while 30mm overheats after three-and-a-half seconds. (Can be prolonged with the autoloader.)

In short, 20mm is more potent against targets who are far away on maps such as Paracel Storm or Golmud Railway, while 30mm is better suited to attacking light vehicles and helicopters at shorter range, such as on Zavod 311.

The Tunguska's secondary armament are missiles and rockets. The type of missile can come down to player preference. Heatseekers are a "fire and forget" type of missile, similar to the FIM-92 Stinger. Passive Radar is good for those who have time and guide the missile to the target, similar to the SA-18 Igla. Zuni Rockets allows players to engage heavily armored vehicles such as MBT and IFVs with greater efficiency and combined with 30mm, can become a "support vehicle" for tanks and other IFVs, but can be deflected by Active Protection. The Active Radar Missiles can be used to lead enemy targets. When firing missiles, a good strategy to utilize is to fire a single missile to trigger countermeasures then wait to fire a full salvo at the newly exposed target.

Optics is player preference. Zoom helps at long range or precise aiming, while IRNV and Thermal optics help to see enemies in foliage.

Upgrades help with abilities: Maintenance helps the player recover quickly from anti-vehicle weaponry; Thermal Camo increase time to lock on, making it effective against lock on weaponry such as Javelins and Guided missiles from aircraft. Auto-reloader works well for 30mm as it reduces time for reload; Proximity Scan detects AT mines and personnel, useful in high traffic roads or for detecting people in ambuscade; Reactive Armor decreases damage against incoming fire, giving an edge in direct combat. Air Radar helps locate aerial vehicles but replaces the minimap.

Generally speaking, the AA is at a disadvantage against MBTs and IFVs, as they are equipped with stronger armor and weaponry. As stated above, however, Zuni Rockets enable an AA to fight heavier armor. It's also important to note that a chopper/jet can still destroy a Mobile AA with correct teamwork.

The vehicle is also amphibious allowing it to cross rivers and lakes, unlike its Battlefield 3 counterpart.

The 9K22 Tunguska is identical to the Chinese Type 95AA in in terms of stats, while the American LAV-AD has wheels instead of treads, but the three are otherwise identical.

9K22 Tunguska-M on the loadout screen