The A-91 is a weapon featured in Battlefield 4. It functions very similarly to its Battlefield 3 counterpart.

Outside of Molina's outpost is a cluster of a blue building and smaller white building. From the roof of the blue building to the white building, a jump must be made. The A-91 rests on the northeast corner of the building. It is equipped with a PKA-S, Magnifier, Compensator and Ergo Grip. It sports an Atomic Woodland finish.

The A-91 is an unlockable Carbine. It's high rate of fire lends itself to high stacked recoil forces, and it's high left and right recoil values make it somewhat unpredictable. It is, however, still reasonably accurate fired in short bursts and the relative recoil, as with most weapons, is negligible at the fairly close ranges the weapon is expected to perform in. 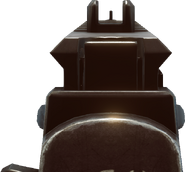