The AA Rocket Gun is a Codex Entry featured in Battlefield 1, introduced in the Apocalypse expansion. It is unlocked upon obtaining ten kills with the AA Rocket Gun. 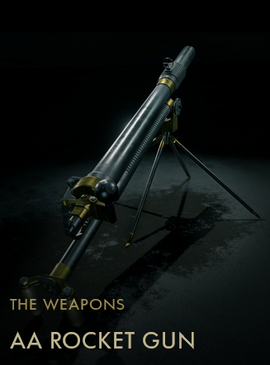 When guns such as the MK ll fell out of favor for due to trench warfare, the idea to use them as air-to-air weapons was introduced. They became potent weapons in the attack on airships and observation balloons, as well as targets on the ground like trains, ammo dumps, and tanks. Most ambitiously, the British air force hoped to use it to attack the German airships that were bombing the United Kingdom. Tests on night fighters proved lukewarm at best, and interest to use the gun as an air-to-air device eventually faded. It was just as well – incendiary machine gun rounds were being introduced to the repertoire of airborne machine gunners, and this new technology made further exploration of airborne rocket weaponry unnecessary.

Retrieved from "https://battlefield.fandom.com/wiki/AA_Rocket_Gun_(Codex_Entry)?oldid=343256"
Community content is available under CC-BY-SA unless otherwise noted.