The Galil ACE is an assault rifle developed by Israel Weapon Industries (IWI) and manufactured by IWI and also FAMAE and Indumil. The ACE family assault rifles are based upon the reliable mechanism of the famous Galil assault rifle.

http://symthic.com/bf4-weapon-info?w=ACE_23
The ACE 23 is an Assault rifle featured in Battlefield 4.

Having a fire rate of 770 RPM, it is capable of effectively competing in close quarters. This weapon is also suited well for mid-range engagements, due to its easy to control recoil pattern. Controlled bursts at longer ranges are recommended to help maintain accuracy. The weapon is balanced compared to other Assault Rifles by having an above average reload time when empty.

It is rather similar to the M416, having a larger magazine, slightly higher fire rate, and a slightly higher muzzle velocity, although the M416 has a faster reload, is slightly more controllable, and has a lower spread increase per shot.

By obtaining kills with the ACE 23, the player unlocks Chinese attachments, while the US and Russian variants can only be unlocked through Battlepacks.

The addition of stability-enhancing attachments such as the Muzzle Brake coupled with the Stubby Grip or using the Angled Grip with a Heavy Barrel greatly extend the weapon's already decent effectiveness beyond close and mid-ranges even further. Notably, the ACE 23 cannot equip any underbarrel attachments. 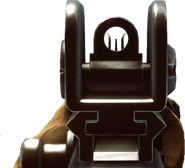