The Galil ACE is an assault rifle developed and manufactured by Israel Weapon Industries (IWI). The ACE family assault rifles are based upon the reliable mechanism of the famous Galil assault rifle. The ACE incorporates enhanced human engineering and ergonomics with the demands of the modern battlefield.

The ACE 52 variant is the close-quarters variant of the ACE 51, being a lightweight carbine firing the 7.62x51mm NATO cartridge with a 400mm barrel and 935mm build with the stock extended. It features many high-tech additions, such as a composite build, multiple accessory-rails and folding equipment.

The ACE 52 CQB is a Carbine featured in Battlefield 4.

The ACE 52 CQB is unlocked by completing the Silver assignment in Suez by scoring 4,000 points. It is equipped with a Kobra, Magnifier and Angled Grip. It sports a Worm Desert finish.

Firing the full-power 7.62×51 NATO round, it assumes the "heavy" carbine role formerly filled by the SCAR-H in Battlefield 3;  a "light" version of the weapon appears in the game as the ACE 21 CQB. Due to its high damage output, the ACE 52 CQB is a capable weapon, nearly edging out the ACW-R for highest damage per second in the carbine class, though the MTAR-21 included with China Rising beats it out due to its higher firerate.

However, the ACE 52 not only suffers from the most substantial vertical recoil out of any of the carbines, but also the slowest bullet velocity at 400 m/s, making it, despite its large caliber and damage, arguably the most close-range oriented weapon in the category. 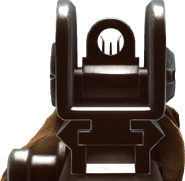