The Galil ACE is an assault rifle developed by Colombia and Israel Weapon Industries (IWI) and manufactured by IWI and also Indumil. The ACE family assault rifles are based upon the reliable mechanism of the famous Galil assault rifle.

The ACE 53 variant is chambered in 7.62x51mm NATO like the ACE 52, but features the longest barrel length of the ACE family at 508mm. Like the rest of the ACE rifles, the ACE 53 features several attachment rails and an ergonomic design.

0.22
15
The ACE 53 SV (Sniper Variant) makes its first appearance in Battlefield 4 as a Designated Marksman Rifle.

The ACE 53 SV is the seventh all-kit DMR to be unlocked, after the M39 EMR and before the SCAR-H SV.

The ACE 53 has similar stats to the SCAR-H SV, except for ammo capacity and reload speed.

While both have pros and cons, the ACE 53 SV has 5 rounds more than the SCAR-H SV in its magazine. Except for capacity and reload time, the choice between the two is up to player preference and playstyle.

The SCAR-H SV is able to land more accurate shots than ACE 53 SV, as well as having lower first shot recoil. However, the ACE 53 SV has one advantage over the SCAR-H SV of lower spread increase per shot.

The ACE 53 SV has somewhat low reserve ammunition, can run out of ammo easily with just two full reloads, AMMO specialization is recommended for countering this.

After the Fall patch, its velocity has been increased to 580 m/s but now it has second-slowest velocity of all DMRs, after the SKS. This velocity, however, is fast enough to be viable as a long-range weapon, though the ACE 53 SV is limited to low-power scopes as with all DMRs. 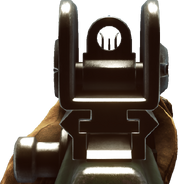