The Bushmaster ACR (Adaptive Combat Rifle), previously known as the Magpul Masada before Bushmaster and Remington took over production, is an assault rifle developed initially and proposed for the future replacement of the M16 and M4 family of assault rifles. The ACR uses the standard 5.56x45mm NATO round but is also intended to be modifiable to employ the 6.5 Grendel, 6.8mm Remington SPC, .308 Winchester and the Russian 7.62x39mm M43 rounds. Similar to other weapons such as the M416 and the SCAR family of rifles, it uses a piston instead of the direct impingement of the M4/M16 series of weapons.

In the Battlefield series, the ACR is referred to as the ACW-R (Adaptive Combat Weapon - Rifle). It fires the 6.5x39mm Grendel round in Battlefield 3 and 5.56x45mm NATO in all other appearances.

The ACW-R appears in Battlefield Play4Free as a purchasable weapon for the Assault class.

The ACW-R in Battlefield Play4Free.
Add a photo to this gallery

[1] Retrieved Sept. 16th
[2]
"This adaptive combat rifle features a number of recent rifle designs and acts as a lightweight, feature heavy, rifle platform. Using the modern, recoil-reducing “Grendel” round, as well as being built to endure rough weather conditions and capable of utilizing standard STANAG magazines, this rifle is equipped to fill many of the roles required by both military and law enforcement uses."

The ACW-R is a weapon introduced in the Battlefield 3: Close Quarters expansion and is unlocked upon the completion of the Done Fixing assignment. It was first seen in the Close Quarters Gameplay Premiere trailer.

The ACW-R is optimized for medium to long range combat, similar to the SCAR-H, with the ACW-R featuring a very controllable and consistent recoil. It is generally weaker than other carbines in close quarters, this is because of the lower damage up close, requiring 5 rather than 4 shots to kill.

Battlefield Premium members may equip the Tactical Camo as well as the Digital Woodland Camo upon the completion of the ACW-R Specialist assignment.

Another view of the ACW-R.

The ACW-R in first-person view.

ACW-R in first-person view.
Add a photo to this gallery

The ACW-R returns in Battlefield 4 as an all-class Carbine. The weapon is unlocked after obtaining 4,000 points while using Carbines. It does average damage for Carbines, but is helped by a very high rate of fire, at 880 RPM. It has a moderate recoil, and unlike other fast-firing weapons like the AEK-971 or CZ-3A1, can be kept on target fairly easily. Its iron sights are sharp and clear.

A Muzzle Brake or Compensator can aid in controlling recoil overall, and an Angled or Folding foregrips can make short bursts more precise.

The Stubby or Potato grips can be useful for increasing accuracy, and the Ergo and Vertical grips aid with firing on the move. A Laser Sight is useful for hipfiring. 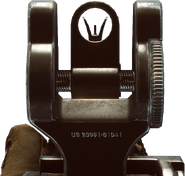 0.38
0.4 ┴ 0.3
"The Adaptive Combat Weapon - Rifle is a lightweight, modular rifle platform that features a short-stroke gas system. The ACW-R is useful in a wide range of engagements, making it a highly versatile rifle."

The ACWR appears as a Carbine in Battlefield Hardline, exclusive to the Operator kit. Originally only available as a pre-order bonus, the ACWR is now available to all players through the Versatility Battlepack.

The ACWR has characteristics similar to the M16A3, having the same firerate and comparable reload speeds, but is optimized for more close quarters and mobile usage, possessing relatively tight hipfire spread, lighter vertical recoil, very low spread increase per shot, and a standard damage model.

The ACWR in first person 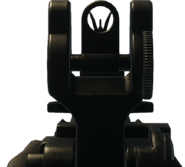 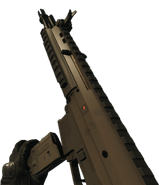 Retrieved from "https://battlefield.fandom.com/wiki/ACW-R?oldid=375161"
Community content is available under CC-BY-SA unless otherwise noted.