The Kalashnikov AK-12 (formerly АK-200) is the newest derivative of the Soviet/Russian AK-47 series of assault rifles and was proposed for possible general issue to the Russian Army. In 2018, the Russian military has adopted both the AK-12 and the AEK-971 for service after some years of evaluation.

During development, the AK-12 prototype based on the AK-200 had semi-automatic, three-round burst and automatic firing modes, and was planned to use a variety of cartridges. However, the final production version unveiled in 2016 abandoned the AK-200-based prototype in favor of another version based on the AK-400, where the burst function was replaced by a two-round burst mode, and the only types of ammunition used are 5.45x39mm for the AK-12 and 7.62x39mm M43 for the AK-15 variant. The AK-12 has interchangeable barrels and Picatinny rails.

The prototype weapon was planned to have a modular design that could configured into different roles, even able to change its caliber by changing the barrel. Versions of these proposed alternate configurations were portrayed in Battlefield 4 as alternate weapons: RPK-12 (light machine gun), AKU-12 (carbine), SVD-12 (designated marksman rifle), and DBV-12 (shotgun).

The AK-12 is an Assault rifle featured in Battlefield 4.

In singleplayer, the AK-12 is used by the Russian Ground Forces as its standard assault rifle. It can be found in Baku and Tashgar off of dead Russian soldiers. It comes equipped with a PKA-S, Magnifier, Heavy Barrel, and Folding Grip, as well as sporting ERDL Woodland paint.

The AK-12 is the default assault rifle for the Assault class alongside the AN-94, and is equipped with a Kobra optic, Laser Sight, and Ergo Grip by default.

It is a fairly balanced weapon, having low-moderate recoil and decent fire rate. The AK-12 has slight tendency to drift left, which is helped by equipping the Compensator attachment, as it makes the recoil profile straighter upwards, at the cost of increased spread per shot. If the player can control the additional recoil, a Heavy Barrel is recommended to improve accuracy. Its lower fire rate of 680 can maintain its controllable recoil but may be a hindrance in extreme close quarters combat, as it can be easily beaten out by some of the faster firing Assault Rifles and PDWs. The AK-12 unlocks Russian attachments, with US and Chinese attachments only attainable through Battlepacks.

The AK-12, along with the AKU-12, has a unique feature in which using the "burst" fire mode increases its firerate considerably, to 750 RPM from 680 RPM. This can benefit the player to fire faster at close-medium range, or to tighten shot placement over range.

AK-12 in the loadout menu

The AK-12 in first-person 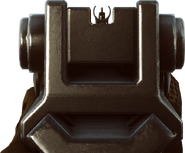 Retrieved from "https://battlefield.fandom.com/wiki/AK-12?oldid=357309"
Community content is available under CC-BY-SA unless otherwise noted.