The AK-47 (Russian: Автомат Калашникова 1947, Avtomat Kalashnikova 1947; "Kalashnikov Automatic Rifle, 1947 Model") is a Soviet assault rifle designed by Mikhail Kalashnikov in 1947. It is known as the most used and most produced firearm in the world, with an approximated 75 million AK-47s and AKMs produced, and a total of around 100 million AK-types produced.

It was often copied, or modified into unique weapons such as the Chinese Type 56, the Israeli Galil, the Finnish RK-62, AKM, the RPK machine gun, and more modern variants, such as the AK-74 and AK-12. It was first put into service with the Soviet Armed Forces and other nations of the Warsaw Pact, and is still in service with many countries today. It became a cultural icon, not just used widely by some paramilitary and guerrilla forces, but also had an effect that has made it popular in some action television programs, films/movies, printed media, and video games.

"In the late 40's, the Russians developed the "Kalashnikov" or AK-47. Despite its simple design, the AK-47 had good range, acceptable accuracy and was extremely reliable. Its quality was evidenced by its use through the sixties and well into the seventies. There are many reports of U.S. soldiers abandoning their M-16s for captured AK-47s. However, the AK-47 had an unmistakable sound when fired and the increased peace of mind brought on by its reliability was countered by the threat of being shot by friendly soldiers."

The AK-47 is a weapon featured in Battlefield Vietnam, issued to the NVA Assault kit. It has a capacity of 30 rounds with 5 magazines in reserve. It has high damage multipliers, low accuracy, moderate recoil and a moderate rate of fire. It is capable of killing in between one and three rounds, depending on shot placement. It is one of the counterparts—alongside the AKMS—to the American and ARVN M16 and CAR-15, although they perform much differently.

[1]
"The AK-47 is an extremely robust weapon that has sacrificed some accuracy for reliability. It fires powerful 7.62mm ammunition from a 30 round magazine."

The AK-47 is a weapon featured in Battlefield 2 as the standard primary weapon for the PLA's Assault and Medic kits. The weapon is very similar to the AK-101 in terms of stats, sharing near-identical spread, rate of fire, and recoil values, although the AK-47 is both marginally more powerful, at 38 damage as opposed to 37, and marginally more inaccurate, with 2.3 spread increase per round as opposed to 2 even.

As with other factions' assault rifles, the AK-47's Assault variant is equipped with an underslung grenade launcher; specifically, the GP-25. Damage-wise, it is the second most-powerful weapon in the assault class, surpassed in damage only by the G3.

In the Battlefield 2: Special Forces expansion, the AK-47 is issued to the MEC Special Forces Medic kit, performing identical to its base game counterpart.

The AK-47 is a weapon featured in Battlefield 2: Modern Combat as the main weapon of the MEC's Assault Kit. It is equipped with an under-barrel GP-25 grenade launcher and has decent accuracy and fire rate with moderate damage. It is also equipped with a 4X scope for better mid to long range accuracy, although burst firing to hit targets at long range is extremely advised.

[2]
"Developed in Russia in the 1940s, the AK47 has become the world's most popular and widely used assault rifle thanks to its reliability and stopping power."

The AK-47 is a weapon featured in the Battlefield: Bad Company 2: Vietnam expansion, issued to the Assault kit. It has a 30-round magazine and open iron sights, though this is due to the misalignment of the rear sight. The weapon is capable of killing an enemy in five to six shots, and has a rather sharp recoil pattern, which can affect long range shooting. 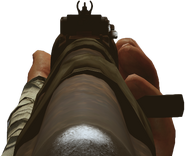 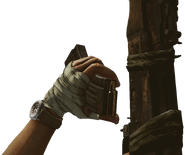 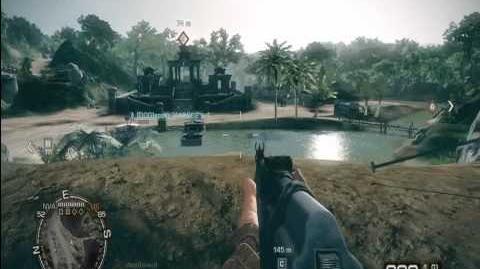 The AK-47 is a weapon featured in Battlefield Play4Free as a purchasable assault rifle for the Assault Kit. It is a high risk-high reward weapon as it has very high damage in close range battle, but also the worst recoil and spread out of all the assault rifles. It is a great weapon in close quarters battle, but outside of that, the weapon suffers from inaccuracy and recoil to prove useful for medium to long range engagements. As far as appearances go, the AK-47 has its classic wooden stock, pistol grip, and handguard with the rest of the weapon being stamped sheet metal.

for Credit purchases, or 89

to have forever, putting it as the most expensive assault rifle that can be bought by Credits or Play4Free Funds. The weapon can also be purchased for 6,749

before level 20 for unlimited use.

The AK47 in Battlefield Play4Free.

More detailed look upon the AK-47 in Battlefield Play4Free. 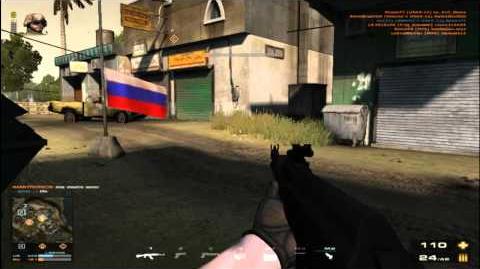