The AK-12U is a proposed carbine variant of the Russian AK-12 assault rifle.

The AKU-12 is an unlockable all class carbine in Battlefield 4. It acts very similarly to the AK-12 assault rifle, having less range and accuracy, but greater hip fire accuracy. It also has a unique feature in which burst fire yields a higher RPM. The recoil is also extremely low, with only a slight upward pull. Due to its moderate fire rate and low recoil, it is a balanced choice for mid-range engagements, and the player will not run out of ammo as quickly as with some rapid-firing weapons.

The AKU-12 being used in Paracel Storm in IGN's BF4 gameplay demo. Click photo to watch the gameplay. 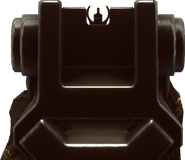 Retrieved from "https://battlefield.fandom.com/wiki/AKU-12?oldid=325056"
Community content is available under CC-BY-SA unless otherwise noted.