It uses a few features of the AK-74, such as the 30 round magazine and the pistol grip, but is otherwise a completely new gun. It has a special 2 round burst setting, utilizing a system known to Russians as "blowback shifted pulse", that negates the recoil until after the second round has fired, so that accuracy isn't compromised.

The AN94 is a weapon featured in Battlefield: Bad Company.

The AN94 can be found on the mission Crossing Over as a collectable. At the very beginning, at Russo-Serdaristani border, it is in one of the houses. It can also be found off of dead Serdaristani soldiers during Air Force One.

The AN94 is issued to the Assault kit. The AN-94 is unlocked by either buying the Gold Edition of Battlefield: Bad Company or by reaching the highest rank (Rank 25, General of the Army). It has a 50-round magazine and 150 rounds in reserve, and an attached GP-30. It is fully automatic and has the second highest rate of fire of the assault rifles, second to the F2000, which is balanced by lower damage. It takes around 12-15 shots to kill an enemy. It is a generally poor choice for long range, as its high rate of fire can easily cause a player to overshoot, and its awkward iron sights can be difficult to use, especially with the gun's muzzle flash. However, it's a great choice for close quarters, where a spray and pray tactic can be quite effective.

The AN94 in Battlefield: Bad Company in the multiplayer map Valley Run.

The AN94's GP-30 being fired in the multiplayer map Valley Run.

The AN94 being reloaded in the multiplayer map Oasis.

"This rifle is capable of putting a two round burst on target from a 100 meters. It substantially increases lethality, stopping power and armor penetration, making it a weapon of choice for the Russian special forces."

The AN-94 Abakan is a weapon featured in Battlefield: Bad Company 2.

The AN-94 is the standard issue rifle for the Russian Army throughout the campaign, and comes with a Red Dot Sight, but they can also be found with a 4X Rifle Scope as seen in the level Zero Dark Thirty, where it is held by a Russian soldier rappelling from a transport helicopter before the part where Marlowe is hit by a flashbang.

The AN-94 Abakan requires 28000 points for the Assault class to unlock. In-game, the AN-94 fires in a two-round burst. Despite this, it is possible to fire the weapon almost as though it were fully automatic. If the player fires as fast as the game allows, it fires at an average rate of 600 RPM, around that of the UMP-45.

Due to the accuracy that comes from its two-round burst, the AN-94 is often used for counter-sniping and ranged combat, much like the M16A2. However, these weapons are not ideal for such long ranges because the high vertical recoil given off by the first shot and the relatively long time for the gun to reset will often let the sniper escape after having being hit by one or two bullets. The AN-94 is commonly used in conjunction with Magnum Ammo as the increased damage output provides a more noticeable and arguably more beneficial improvement at all ranges when compared to Marksman Training.

This weapon has clearly defined iron sights, much like the G3. However, the AN-94's sights obstruct a considerable portion of the screen surrounding the target. The iron sights may be satisfactory but they can reduce the player's awareness at most ranges, a 4X Rifle Scope is a good complement to the weapon's accuracy at medium range while the Red Dot Sight will help improve the player's awareness in close range engagements often experienced in Squad Deathmatch.

Like the M60, the AN-94 was originally much more powerful than it became through patches. Its close range damage was about 20, making it more powerful than most other assault rifles. However, its damage was reduced to 16.7, that of the AUG, XM8 and M416. This gave the assault rifle the lowest damage per second due to its slow rate of fire; coupled with the longest reload and second highest recoil, the popularity of the AN-94 quickly diminished due to the patches. It can still be used very effectively in medium to long range situations, even its alleged weakness at close quarters can be easily overcome by quickly firing from the hip.

The AN-94 Abakan's iron sights. 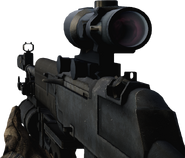 The AN-94 Abakan is a weapon featured in Battlefield Play4Free for the Assault kit. Even though its rate of fire is lower than other assault rifles, it is unique in that it fires two shots at the same time per click, unlike the M16A2 that fires each bullet in succession after a single mouse click.

This gives the AN-94 the illusion of a very high fire rate. Combined with its high damage (assuming both of the bullets fired per shot connect with their target) and easily controllable recoil when fired at a moderate pace, it is a very powerful weapon and only suffers at close range due to its "decreased" fire rate. It is more suited to medium to long range engagements, and users should try to stay away from close-quarters battles.

The AN-94 as it appears in-game

Running with the AN-94

Soldier with an AN-94

More detailed look of the AN-94 in Play4Free

The furthest an enemy can be for the AN-94 to do its maximum damage at 15m.

The closest an enemy can be for the AN-94 to do its minimum damage at 50m.

http://symthic.com/?s=bf3 Retrieved Sept. 9th
"In service with elite Russian forces, the AN-94 offers a unique, highly accurate, 2 round burst feature. Compared to the standard AK series, the AN-94 requires a significantly higher degree of training. A skilled shooter can effectively engage targets at a longer range than typical Assault Rifles."

The AN-94 is a weapon featured in Battlefield 3.

The AN-94 is only found amongst the VDV troops during Rock and a Hard Place, equipped with various sights (Kobra/PK-A/PKS-07/PSO-1) and other attachments (Foregrip,Heavy Barrels, Bipods, and Tactical lights).

The AN-94 is an all-faction weapon unlocked for the Assault kit once the player has reached 166,000 Assault score. It features burst and full-auto firemodes; however, unlike the other weapons with the same feature, the AN-94 is set by default to burst mode, and fires a two-round burst as opposed to the more common three-round-burst. The AN-94 is unique in that its burst fire mode is two times faster than its fully-automatic firemode: whereas the automatic firemode fires at a cyclic rate of 600 rounds per minute, the two round burst fires at a cyclic rate of 1,200 rounds per minute. However, achieving this rate of fire in a sustained fire is very hard, and for all but the most experienced players very inaccurate. But it can be devastating as the AN-94 is capable of out-shooting any other assault rifle, faster than even the FAMAS. The AN-94 can lose in close quarters combat to other high fire rate weapons due to its low automatic fire rate, unless two-round burst mode is used.

The AN-94 also has the third highest vertical recoil of the assault-kit weapons, just after the FAMAS and G3A3. Though its recoil is considerably high, its first shot recoil is not. On fully automatic, the second shot can still hit a target at a medium range. On two round burst, the first shot multiplier is zero, meaning that there is no recoil at all between the first and second shots. This results in extremely precise bursts, allowing for both of the shots to land very close to one another.

Only the spread affects the rifle. This tight bullet grouping allows for effective engagement of very long range targets on the burst setting. Due to the behavior of the burst-fire mechanism, horizontal recoil is practically a non-existent issue, and as such, the Foregrip does little to help (if not directly damage) the AN-94's performance, as it detracts from the rifle's key strength, which is the extreme accuracy of the 2-round burst fire. The bipod can also be used on the AN-94, to significantly reduce felt recoil, which helps at longer distances to increase the firing pace of 2-round bursts, and increase damage potential. 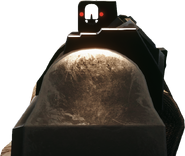 AN-94 in third-person view.

The AN-94 in the singleplayer level Rock And A Hard Place.

The AN-94 is an assault rifle introduced in the Weapons Crate Pack of Battlefield 4. It was added along with the other weapons included in the pack to the Community Test Environment on March 30, 2015 for Alpha testing. Like its Battlefield 3 counterpart, the AN-94 features a unique two-round burst firemode that substantially increases the weapon's accuracy and rate of fire.

The AN-94 is unlocked for use by default alongside the AK-12. Unlike its Battlefield 3 counterpart, the Battlefield 4 AN-94 has a limiter on the frequency at which one can tap the burstfire, limiting its average rate of fire potential to 900 rpm. Still, it maintains an extremely high probability of both shots hitting the same target.

While it is not as effective in full-auto fire as other weapons, due to its low rate of fire, the AN-94's higher fire rate and low first-shot recoil in burst mode allows it to potentially outgun most other weapons at medium range, due to its high precision.

AN-94 in first person

Flicking away the magazine during a reload

AN-94 equipped with Relish Camo 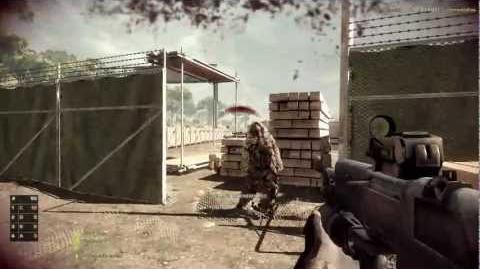 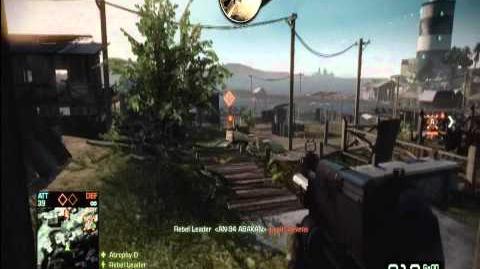 AN-94 Abakan
Gameplay with the AN-94 Abakan in Battlefield: Bad Company 2 at Valparaiso and Arica Harbor in Rush mode 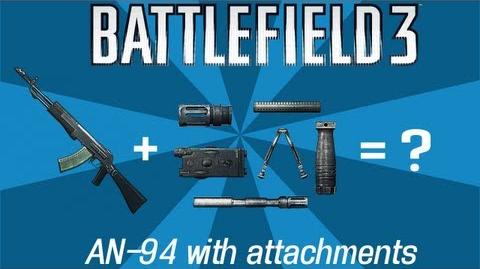 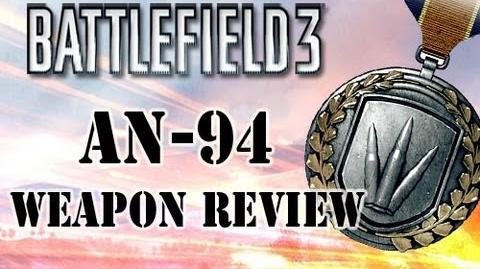 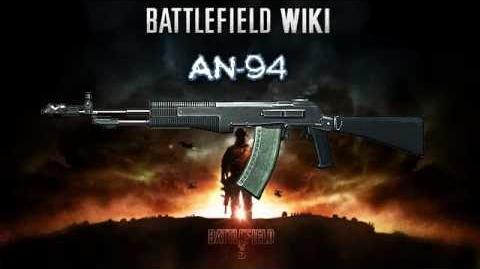 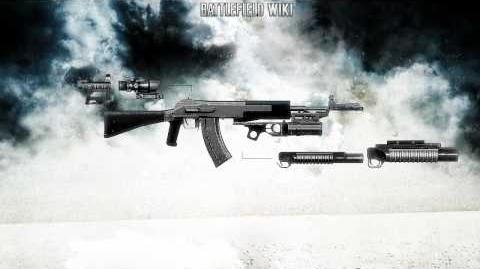 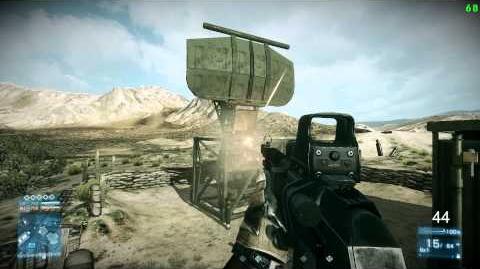