The AS Val (Russian: Автомат Специальный Вал, Special Automatic Rifle "Shaft"), is a Soviet-made assault rifle chambered for the 9×39mm cartridge with an integrated suppressor. Developed during the late 1980s by TsNIITochMash (Central Institute for Precision Building) it was later adopted in 1987 by the KGB and Soviet Army and later the Spetsnaz, FSB, MVD, and parts of the Russian Ground Forces. Variants including the VSS Vintorez and SR-3 Vikhr are also produced.

[1]
"This Russian designed assault rifle with an integrated suppressor firing similar round to the VSS Vintorez at 1200 rounds per minute. However due to the compact size, rate of fire, light weight and range limits HQ has decided to ship this weapon out to Engineers. Also the heavy round it fires travels too slow to be put to good effect as a long range weapon, yet excels in close quarters combat."

It features a fair amount of ammo, decent range, good damage and a very fast firing rate. This weapon excels at close range combat thanks to its extreme rate of fire and ease of control even when fired from the hip.

Even as the damage starts to drop off drastically at longer ranges, the AS-Val can still prove to be a huge threat due to its rate of fire and accuracy. Aside from the damage drop off, the only other major downside to this weapon is rate of which the ammunition is expelled.

Symthic
IGN Wiki
"The AS VAL is an integrally suppressed Soviet designed Assault Rifle developed for use in the Spetsnaz. Chambered for a special high performance armor piercing 9x39mm round, the AS VAL includes mounts for using optical, red dot or even night vision scopes. The VAL is designed to be fired only with the suppressor attached, and therefore prevents the rifle from mounting underslung attachments."

The AS Val is a weapon featured in Battlefield 3.

The AS Val with a Kobra attached is one of the starting weapons in Comrades along with the AKS-74u. One of the GRU characters, Kiril, also uses this weapon throughout the singleplayer campaign.

The AS Val is unlocked at Rank 45 as part of the all-kit weapons. It is classified as a PDW even though it is technically a compact assault rifle. The AS Val has very high recoil despite a low first shot multiplier.

The lack of first shot recoil, high long range damage, high fire rate, and very good horizontal recoil characteristics make the AS VAL the most powerful long range PDW. It is competitive with assault rifles due to its very high damage output at range, and up close the high fire rate offsets the low damage, potentially allowing kill times comparable to average assault rifles and PDWs like the P90.

It's worth noting that as the initial recoil multiplier of the AS Val is an unusual 0.5x; it can be especially advantageous for the AS Val to be fired semi-automatically at longer ranges. The weapon's very slow muzzle velocity becomes its ultimate shortcoming at range despite having the highest long range damage of all the PDWs.

Despite being a suppressed assault rifle, the AS Val maintains a high degree of semi-automatic accuracy and a very flat trajectory but since the June 2012 patch, its full automatic accuracy was greatly diminished to remark its use in CQB and medium ranges over long distances and is a good choice for an all-purpose weapon in the PDW section.

The AS Val can accept a wide range of optics and the Tactical Light and Laser Sight accessories can be used. A patch later implemented the Extended Magazine as an attachment.

The AS Val in the singleplayer level Comrades.

AS Val in First-person view 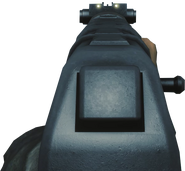 Iron sights of AS Val

Left side of AS Val 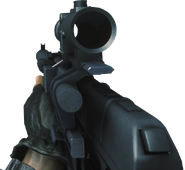 AS Val with assorted attachments

0.4 (static)
0.8 (moving)
"The AS VAL is an integrally suppressed Soviet designed Assault Rifle developed for use in the Spetsnaz. Chambered for a special high performance armor piercing 9x39mm round, the AS VAL includes mounts for using optical, red dot or even night vision scopes. The VAL is designed to be fired only with the suppressor attached, and therefore prevents the rifle from mounting other barrel attachments."

The AS VAL is a weapon featured in the Battlefield 4: Second Assault expansion for the Engineer kit. It is unlocked upon completion of the Co-Pilot assignment.

Compared to Battlefield 3, it has much higher damage at close range, and maintains its high damage across range. Similar to the Groza-4, it features a hybrid combination of suppressor and a heavy barrel making it more accurate than any other PDW. Its high damage gives it a large advantage at close to medium range, better than any other automatic weapon in damage per second, but it suffers from a small magazine capacity.

The Angled or Folding grips are useful for reducing its 2.55x sharp kick. These can make the weapon more efficient at medium range accuracy.

AS VAL in first person

No Attachment
Laser Sight
Tactical Light
"This integrally-suppressed, Soviet-designed assault rifle was developed for the Spetsnaz. It chambers armor-piercing 9x39 rounds and has mounts for a wide variety of optics."