For the variant in previous games, see L96A1.

The Accuracy International AWM (Arctic Warfare Magnum), designated the L115 by the British Armed Forces, is a British bolt-action sniper rifle. Based on the L96, the AWM is a member of AI's Arctic Warfare family of sniper rifles, designed for flexibility and easy serviceability. The AWM is the Magnum variant of the family, and can be chambered for either .300 Winchester Magnum or .338 Lapua Magnum rounds, giving the weapon significant stopping power and an effective firing range of over 1,000 meters. The weapon uses a fluted barrel to improve muzzle velocity and decrease weight, and has an attached folding stock for easy portability.

The L115 is introduced in Battlefield 4: China Rising, originally designated as the L96A1. It is unlocked by completing the Need Only One assignment.

Compared to other bolt-action sniper rifles, it has an average damage profile and rate of fire, but has slightly higher bullet velocity. While it is beaten out at close range by faster-firing sniper rifles such as the M40A5 and Scout Elite, and lacks the extreme range of the CS-LR4, JNG-90, and M98B, its stats are very well balanced for medium range, making it a good overall choice for most situations.

It comes with a Rifle scope (8x) equipped by default. 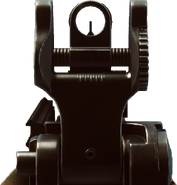 0.7
0.005 ┴ -0.005
"The AWM is a bolt action sniper rifle that has seen service around the world in the hands of law enforcement. This rifle fires a hard-hitting round and long distances very accurately."

The AWM is a sniper rifle featured in Battlefield Hardline, exclusive to the Criminal Professional. It is a high damage rifle with high accuracy, but has the smallest default magazine size along with the .300 Knockout at five rounds and somewhat slow reload compared to the other rifles.

Iron Sights
Add a photo to this gallery

Retrieved from "https://battlefield.fandom.com/wiki/AWM?oldid=367575"
Community content is available under CC-BY-SA unless otherwise noted.