Not to be confused with the AWS light machine gun
The Accuracy International AWS (Arctic Warfare Suppressed) is a specially designed variant of the Arctic Warfare rifle that fires the .308 Winchester subsonic cartridge. The weapon features an integral suppressor that houses a 16'' barrel. The AWS' barrel can be swapped for the barrel used by either the AW or AWM within about three minutes, but the weapon requires re-zeroing afterwards. The AWC (Arctic Warfare Covert) is a version of the AWS that features a folding-stock like the AWM and an overall barrel length of 12''.

The AWS appears in Battlefield Hardline, modeled after the AWC model with folding stock.

The AWS is an all-class Sniper Rifle introduced in the Battlefield Hardline: Getaway expansion. Like the .300 Knockout, the AWS is fitted with a permanent Suppressor and cannot equip any barrel attachments.

The AWS in first person 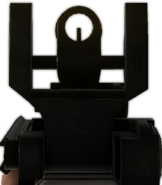 Working the bolt
Community content is available under CC-BY-SA unless otherwise noted.
Advertisement