A Changing World is a Codex Entry featured in Battlefield 1. It is unlocked upon obtaining one multikill in multiplayer.

HOW THE GREAT WAR SHAPED THE WORLDEdit 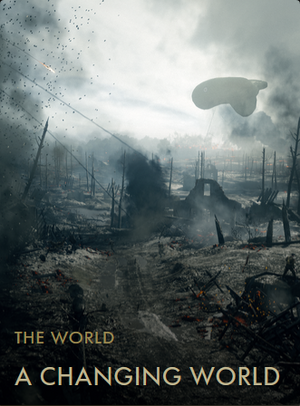 The loud thunder of the guns of August 1914 destroyed an old world and began to shape a new one on the backs of millions of the dead. All thoughts of honor and heroism that once romanticized war evaporated in the face of industrialized killing machines.

Poison gas suffocated men and animals in their sleep, machine guns mercilessly mowed down whole companies of men in mere moments, and high explosive artillery shells left no spot on the battlefield unscarred. Tanks, armored cars, and motorcycles began to replace the once mighty cavalry units, and oil became a vital factor in the global economy as the industrial might of a country now determined how long it was able to withstand its enemies.

The home front knew no non-combatants, for working in a factory prolonged the war as much as standing in the front lines in an age of total war. Centuries-old empires fell and many new nations were established from their ashes. Colonies demanded their independence. A whole generation of men came home scarred and wounded, mentally and physically ill.

Women who had taken on traditional male and roles in society during the war asserted their independence and gained suffrage all over the world. New ideologies like fascism, communism, and internationalism replaced the old aristocratic order, and powerful new players appeared on the world stage. The war saw development of medicine, radio, aviation, and much of modern science and technology at a pace never even dreamed of before, but the price was almost inconceivably high.

Retrieved from "https://battlefield.fandom.com/wiki/A_Changing_World_(Codex_Entry)?oldid=343139"
Community content is available under CC-BY-SA unless otherwise noted.