A European Powder Keg is a Codex Entry featured in Battlefield 1. It is unlocked upon starting the singleplayer campaign. 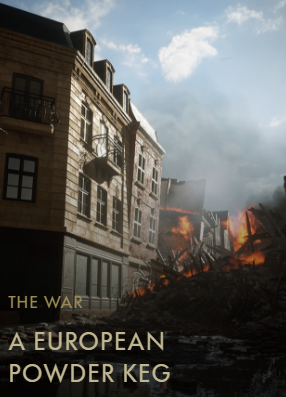 The two sides in the war were two alliances of empires. the Central Powers were the German Empire, the Austro-Hungarian Empire, the Ottoman Empire, and Bulgaria. The Entente Powers, today often referred to as the Allies, were composed of many more nations and featured the British and Russian Empires; two of the three largest empires in World history, who ruled more than a third of the world between them.

Before the war, though, the alliances had been somewhat different. The Triple Alliance between German, Austria-Hungary, and Italy was counter-balanced by the Franco-Russian alliance, and most people believed that these alliances would prevent war. They were wrong.

Retrieved from "https://battlefield.fandom.com/wiki/A_European_Powder_Keg_(Codex_Entry)?oldid=343436"
Community content is available under CC-BY-SA unless otherwise noted.