A True Knight is a Codex Entry featured in Battlefield 1. It is unlocked by flying in any plane for thirty minutes.

THE KNIGHTS OF THE SKIESEdit 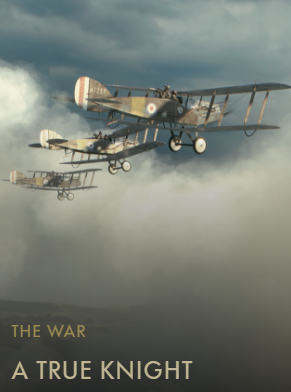 Flying Aces were the rock stars of World War One. Knights of the skies, loved and admired around the world, receiving dozens of love letters a day, their pictures adorning the bedroom walls of millions of teenage girls. Their names are immortal; the Red Baron, Billy Bishop, Eddie Rickenbacker, Werner Voss, Oswald Boelcke, Albert Ball, Max Immelmann, Rene Fonck, Georges Guynemer, Charles Nungesser, and more, and they were perceived as true gentlemen, fighting man to man, with respect between pilots transcending borders.

While that perception may have been somewhat true early in the war, by the later stages of the war it was anything but that. Flying most often in formation and attacking with machine guns, the life expectancy of pilots was frequently measured in hours, and a perfect kill was when the enemy never saw you coming.

Retrieved from "https://battlefield.fandom.com/wiki/A_True_Knight_(Codex_Entry)?oldid=372520"
Community content is available under CC-BY-SA unless otherwise noted.