A War in France is a Codex Entry featured in Battlefield 1. It is unlocked by collecting all Field Manuals in the chapter Fall From Grace in the singleplayer mission Friends In High Places. 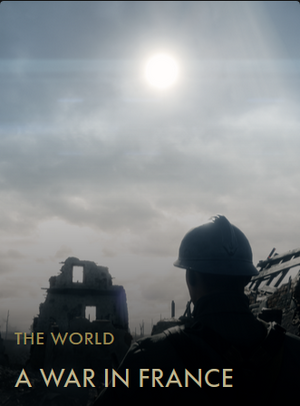 During his two-year tenure as German Army Chief of Staff, Erich von Falkenhayen was convinced that the war had to be won in the west, and that meant in France. The French, however, were not going to let this happen. For the first half of the war, they provided the bulk of the manpower on the Western Front, and throughout the war held off the Germans as the leaders of the Entente Powers. French soldiers also fought on most other fronts of the war, like the Balkans, Gallipoli, Africa and the Pacific.

It was the French who produced the new weapon - the tank - in the greatest numbers, French military writers who first described modern assault tactics, and it was the French 75 field gun - for which the Germans had no match - that military historians call "the savior of France".

Fighting on their home soil, and with large area of their industry and resources in enemy hands, the French nevertheless turned the war into a war of attrition, and it was a war the Central Powers could not win.

Retrieved from "https://battlefield.fandom.com/wiki/A_War_in_France_(Codex_Entry)?oldid=343248"
Community content is available under CC-BY-SA unless otherwise noted.