This article is about the multiplayer map Acta Non Verba. For the campaign mission of the same name, see Acta Non Verba (Singleplayer)

PlayStation 3, Xbox 360
"With small villages nestled around streams, rivers, and heavy forests, you are thrown deep into an intense covert infantry mission for control of Zabograd Bridge and its toll revenue!"

Acta Non Verba is a map featured in Battlefield: Bad Company. Acta Non Verba focuses around the city of Zabograd, pitting the US Army and Russian Army against each other for control of the city.

Acta Non Verba was released for free after a community vote of which campaign levels were to be remade for Conquest mode after it was released for free a few months before. DICE let the community decide on which two maps they wanted the most to be available in multiplayer. Par for the Course and Acta Non Verba came out on top, and DICE chose Ghost Town and Crossing Over to complement them in the map pack.

Acta Non Verba is an infantry-only map, with teams starting on opposite sides of the river that cuts vertically between the eastern and western sections of the historic town of Zabograd. Inside its crumbling outer walls on the east side, the town is arranged in a square, with tall buildings lining the cobblestone streets, winding outwards from a central park area. The west side is more sparsely developed, with houses built along two roads that form a triangular sector leading out of town. A single bridge spans the river, overlooked by imposing stone arches at both ends, and further by old but solid city walls along the eastern riverbank.

The southern side inland from the riverbank of the two halves is a forested area that can be used to flank, whilst the river itself is shallow enough to be forded at points in order to bypass the chokepoint that is the map's central feature. It also contains a number of marshy islands that can provide firing positions when making the crossing.

In Conquest, the map's five flags are arranged with two on each side of the river, with Zabograd Bridge forming the remaining, central capture position. In addition, instead of being located near bases, each side of the map has a single Ammo Crate to resupply from, with a third located on the bridge itself.

The Russian delployment consists of a pair of cabins and a fuel sheds near a historic archway on the west side of the river, south of Preston's Cafe. It is one of the more isolated flags, tucked away behind rows of buildings and on the edge of the thick southern forest. To the east, a pathway of shallow marshland can provide an alternative river crossing.

Preston's Cafe consists of a lone structure, signage denoting it as both a hotel and the Trabak Diner and Cafe, which sits by the riverbank on the north side of the western section of town. Raised high up from the waterline by foundations, the flag is separated from the land by a narrow canal crossed over by a short footbridge, which is incidentally one of the only ways to reach the objective area. Around the base of the two-storey building is a paved outdoor dining area surrounded by a low stone wall, and with ornate pillars at the bridge ends. Both the patio and the cafe building can be used to fire against the adjacent river marshes and the north side of the Zabograd road bridge.

The centerpiece of the map, the Zabograd road bridge spans the river in the direct middle of town - the capture zone is, incidentally, right in the middle of the bridge. The bridge itself is almost completely devoid of cover other than short walls that line the bridge sides, and a toll booth and some HESCO blocks just outside the capture radius near the center. Players on the bridge are not only exposed to enfilade fire along the bridge length, as the tall stone archways that overlook the bridge at either end, as well as the fortification walls that continue on the eastern side of the river, can be scaled using scaffolding granting access to strong elevated positions. In addition, each archway has two KORD emplacements on the battlements.

To avoid exposing themselves, players can be capture the flag from underneath the bridge. Holes can be blown in the bridge with explosives, permitting those on top to target those below and vice versa. Ladders at the sides of the bridge can be used to climb up from the waterline, which is shallow around the bridge's supporting columns, allowing troops to fight from those positions.

Little Italy is found on the south side of the eastern riverbank. It is made up of a construction site that surrounds a building under renovation, with scaffolding around its exterior. In the yard to the south, shipping containers, construction supplies and corrugated iron falls create a somewhat closed-off capture area, which can be opened up again using destruction. The wide roadways to the east and west of this flag can be hazardous to approach from, although the adjacent rows of buildings provide ample cover.

The US Base is on the north side of the eastern sector, and like the Russian base is near another ruined stone archway that once marked the city's outer perimeter. The area is considerably more open than the Russian deployment - the spawn area is on the north side of a large cobblestone roadway, and is orientated around a single bungalow. A number of shipping containers and skips stand alongside the road parallel to the house. 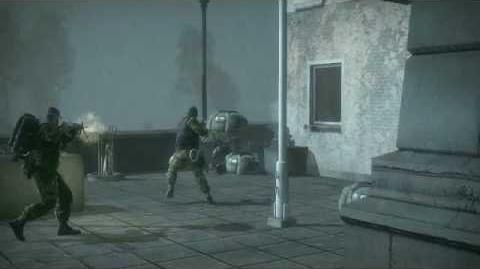 Retrieved from "https://battlefield.fandom.com/wiki/Acta_Non_Verba_(Multiplayer)?oldid=357960"
Community content is available under CC-BY-SA unless otherwise noted.