African American Troops is a Codex Entry featured in Battlefield 1. It is unlocked upon completion of the chapter Break of Dawn in the singleplayer mission Storm of Steel. 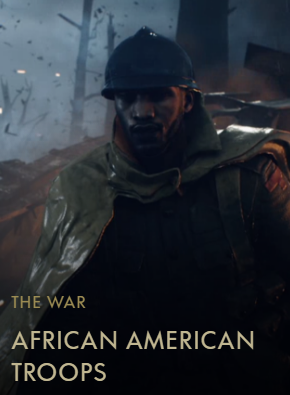 The United States Congress passed the Selective Service Act in 1917 for all males aged 21-31, allowing African American men to serve in the U.S. Army. Many were eager to join the war effort, and only weeks after the USA declared war on Germany the quota of soldiers was already filled. However, this did not mean that there was no discrimination or segregation within the army. African Americans were not allowed to serve in the Marines or in high positions in the Navy, though every other branch was theoretically open to them.

There were only two regular combat divisions, the 92nd and the 93rd, that included African Americans among their ranks in 1917. They were soon deployed on the Western Front as the U.S. Army fought alongside the French Army in Meuse-Argonne and the Second Battle of the Marne. Time and time again they prevailed under heavy German fire and as a result the 369th regiment, the "Harlem Hellfighters", was often mentioned in dispatches.

Men like Henry Lincoln Johnson, James Reese Europe, and Needham Roberts became celebrated figures. True to their motto, "God damn, let's go", they served nearly 200 days in the front lines and were the first U.S. unit to be awarded the Croix de Guerre. Integrated into the French 161st Division, they were outfitted with French weapons and equipment, making the distinct look of the Adrian helmet one of their symbols.

The 369th regiment claimed that they were the first unit to cross the Rhine and into Germany itself.

Retrieved from "https://battlefield.fandom.com/wiki/African_American_Troops_(Codex_Entry)?oldid=343422"
Community content is available under CC-BY-SA unless otherwise noted.