The Afrika Korps (German: Deutsches Afrikakorps, DAK; English: German Africa Corps) was Nazi Germany's expeditionary force in Libya and Tunisia during World War II. Originally a "blocking force" sent to support the Royal Italian Army in Libya, the Afrika Korps combated the Allied forces during the North African Campaign of the war. The force was active between February 12, 1941 to May 13, 1943, and had a reputation for its will to fight the superior Allied forces to the very end.

In Battlefield 1942, the Afrika Korps appears as one of the base game Axis factions, and as one of three available military forces of Germany in the game. The force fights exclusively against the British Army on maps in the African Theater.

The Afrika Korps' military equipment does not differ from the Wehrmacht's.

Soldier kits wear similar uniforms to the Wehrmacht as well, but use green field tunics with tan web gear along with tan trousers and helmets. A yellow armband labelled with the text "AFRIKA KORPS" is present on each kit's right arm.

As with weapons, the Afrika Korps uses the same vehicles as the Wehrmacht, albeit with a smaller overall selection. However, their vehicles are given desert camouflage instead of the Wehrmacht's grey camouflage - tan for ground vehicles and aircraft, with the Stuka sporting a distinctive leopard pattern.

An Afrika Korps Engineer in a Kübelwagen at El Alamein 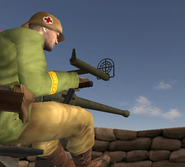 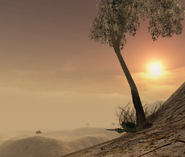 An Afrika Korps Scout hides in a bush at Gazala

The Afrika Korps is not a distinct faction in Battlefield V, as the entire German contingent of the Axis is referred to simply as Germany. However, the organization is mentioned by name in the singleplayer war story Under No Flag, as well as in announcer dialogue of the Grand Operations Operation Battle Axe, implying their involvement on the North-African maps Aerodrome and Hamada.