Airborne Cannons is a Codex Entry featured in Battlefield 1. It is unlocked by destroying ten aircraft within thirty seconds of using the QF 1 AA at the end of the chapter Forte et fidele in the singleplayer mission Friends in High Places.

One of the more difficult codex to unlock, it may take numerous attempts to complete. As such it is recommended to reload the last checkpoint immediately if the codex has not been unlocked by the time the Airship L30 comes into view. This also allows players to practice and improve their timing multiple times to eventually unlock it.

Despite the relatively large number of enemy aircraft, players should lead their shots in order to score successful hit. They should also take note of friendly aircraft as they are easy to mistake for enemies and will waste precious time if hit.

CANNONS IN THE SKIES[edit | edit source] 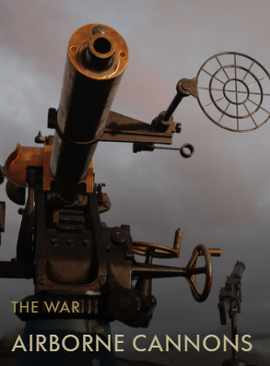 The fighting from air to ground and from ground to air saw incredible innovation during the First World War. The development of automatic cannons that could be carried by planes or mounted on defensive positions on Airships was constantly improved.

Many spectacular kills have been credited to this innovation in warfare. As early as 1915, a plane mounted with a 37mm cannon on the rear seat scored a direct hit on an enemy plane. Later revisions saw 37mm semi-automatic cannons mounted inside of the engine block of a plane allowing the pilot to point the plane in the direction of fire.

As war continued, bigger cannons (75mm) were fitted to planes in many different configurations that allowed for new roles supporting ground troops but also special missions like submarine hunting. 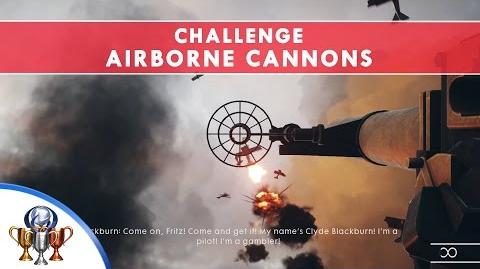