The Zeppelin L30, factory number LZ 62 was the first R-class "Super Zeppelin" of the Imperial German Navy during World War I. Constructed at Friedrichshafen Germany by the Luftschiffbau Zeppelin company it took its first maiden voyage on May 28, 1916 and was at the time the world's largest zeppelin. It was the most successful airship of the war, having completed 31 reconnaissance flights and 10 bombing runs until its decommissioning in 1917. Having survived the war, it was given to Belgium as a part of war reparations against Germany. As no suitable placement could be found for the airship, it was disassembled in 1920 with the remaining gondolas put on display at the Royal Military Historical Museum in Brussels. They are the only remaining gondolas of a war Zeppelin in the world.[1]

In Storm of Steel, a German Airship L30 arrives to attack the American 369th Infantry Regiment defending against a German advance. The airship's Becker Type M2 cannon fire knocks the player, a Maxim machine gunner, back and forces him to fight off the surrounding German forces. The airship is later seen being destroyed and crashing in the distance, burning in a spectacular fireball.

The Airship L30 plays a larger role in Friends in High Places, where two German Zeppelins arrive as part of an air raid over the skies of London, England. After Clyde Blackburn and Wilson destroy one of the Zeppelins in their Bristol F2.B, they are shot down by one of the AA guns on the other Zeppelin as Blackburn was trying to taunt the AA gunner, and crash on top of the damaged airship. Blackburn and Wilson traverse through the airship, fighting German crewman along the way. Blackburn kills the gunner who shot him down and takes the AA gun for himself, using it to fight off German aircraft. A third Airship L30 arrives, and Blackburn easily destroys it with the AA cannon. A fourth and final airship arrives after Blackburn is momentarily ambushed by a German soldier, and is also swiftly destroyed. However, it begins to crash into the airship that Blackburn, Wilson, and the German soldier were on, forcing the three men to jump into the River Thames. The airship is then seen burning and falling in the London skies, as the smoke from the burning wreckage of the other destroyed airships is seen in the distance.

This item has a Codex entry: L30 Airship

The Airship L30 is a Behemoth featured in Battlefield 1, appearing on certain maps. In Conquest, it is automatically spawned for the team that is behind in tickets at a certain point in the round, foghorns sounding its approach. It also features prominently on both versions of Air Assault on London Calling, part of Battlefield 1: Apocalypse.

The captain (seat 1) operates the Zeppelin and can move it around the map to drop up to three bombs over a target, while the airship's altitude is automatically maintained. The captain will also be credited for kills caused by aircraft crashing into the hull.

Seat 2, 3, and 5 operate 20mm autocannons from the port and starboard sides and in a cup mount on the rear gondola, which can be used to supplement its firepower. On London Calling these guns behave more like QF 1 AA guns.

Seats 4 and 6, operate a Maxim MG to defend against enemy aircraft from the bow and prow of the canopy respectively.

The arrangement is reminiscent of the defense guns used by Titan carriers from Battlefield 2142. Players can freely switch between seats due to catwalks and hatches linking the positions, although there is no animation for doing so.

Players can drop into the ground battle at any time via parachute—this will happen automatically to those who spawn on an Airship with all passenger slots occupied. Players may exit from the fourth seat to the top of the zeppelin, where they can walk freely.

The airship can absorb a lot of damage with Explosive Rockets and QF 1 AAs being the only reliable to effectively cause damage but mounted Maxim MGs are also capable of harassing although this is less reliable in comparison to sustained fire. The ship's hulking presence makes it an almost unmissable target to those in range.

There are a series of weak spots along the airship frame, easily identified as they take fire:

The airship takes additional damage as each of these areas are destroyed, and also provide a bonus for the player responsible.

The gondolas and propellers themselves can also be destroyed, leaving the airship's defensive capabilities temporarily diminished. After the ruins fall to the ground, a replacement gondola will respawn after a set period of time. Propellers, however, will not respawn and will make it harder for the pilot to turn. Caution must be advised as the fallen gondolas can explode and kill any players caught underneath.

Marksmen, vehicles, and even certain machine guns are capable of targeting and dispatching the gunners meaning that the captain should protect other passengers by maneuvering the airship so that either side faces the enemy, though this can make aiming somewhat more difficult for everyone.

Once the vehicle loses all its health it will slowly burn and crash to the ground, destroying buildings and objects caught in the crash zone. Its skeletal wreckage will remain as an obstacle throughout the rest of the game. Players standing on the portion of the upper canopy that has not burned can potentially ride the debris down or parachute to safety.

Airship L30 from the front

First person pilot view. The pilot controls the vehicle from the front section of the airship's forward gondola.

Second position view. The gun is mounted on the left side of the forward gondola.

Third position view, on the right side of the forward gondola.

Fourth position view, position on top of the front section of the airship.

Fifth position view. This gun is emplaced at the front of the airship's rear gondola.

Sixth position view, on the top of the tail section.

Zeppelins at the end of Friends In High Places 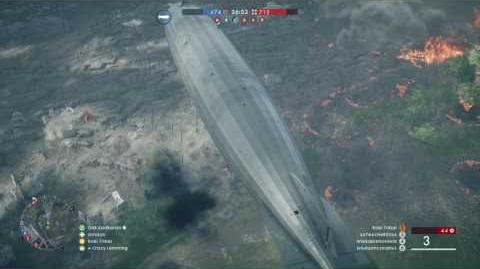 The Airship Gameplay
Add a photo to this gallery

Retrieved from "https://battlefield.fandom.com/wiki/Airship_L30?oldid=357967"
Community content is available under CC-BY-SA unless otherwise noted.