AL-FAW is a Codex Entry featured in Battlefield 1. It is unlocked upon winning any gamemode on the map Fao Fortress. 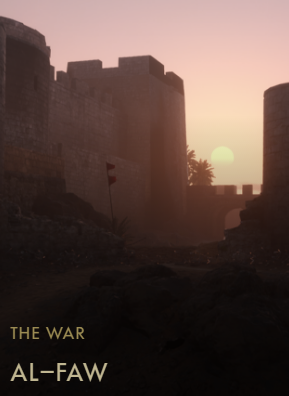 When the Ottoman Empire joined the Central Powers in early November 1914, the British Empire feared for the security of its oil wells, pipelines, and refinery at Abadon near the Persian Gulf.

They moved to capture the Ottoman controlled Al-Faw Peninsula, and the ancient Fortress of Fao was the main Ottoman stronghold there. Within days of the Ottomans joining the war, a British naval fleet was in position and a joint marine attack with the Indian Expeditionary Force was launched.

The wall of the fortress were breached by heavy artillery, allowing the Indian-British forces to seize the fortress in bloody hand to hand combat, taking the the port of Fao the next day. This was the first action of the Mesopotamian Campaign, which continued until the capture of Baghdad in 1917. The victory relieved all British concerns about the safety of their oil.

Retrieved from "https://battlefield.fandom.com/wiki/Al-Faw_(Codex_Entry)?oldid=343322"
Community content is available under CC-BY-SA unless otherwise noted.