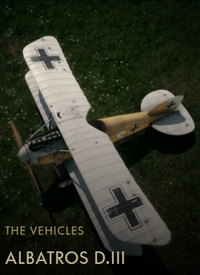 Perhaps the best fighter of the war, The Albatros D.III was flown by pilots in the Imperial German Army Air Service and the Austro-Hungarian Air Service during the First World War. During the period known as "Bloody April" in 1917, the Albatros was the preeminent fighter plane. The plane was flown by many aces including Ernst Udet, Mandred von Richthofen and Kurt Wolff.

The plane had an excellent climb rate and controllability, and was primarily used for destroying enemy balloons, airplanes and escorting bombers. It saw action on the Western Front but also in the Middle East. In total, 1346 Albatros planes were built.

Retrieved from "https://battlefield.fandom.com/wiki/Albatros_D.III_(Codex_Entry)?oldid=343284"
Community content is available under CC-BY-SA unless otherwise noted.