Alcohol In The Trenches is a Codex Entry introduced in the Battlefield 1: Apocalypse expansion. It is unlocked upon obtaining one kill with the Wine Bottle. 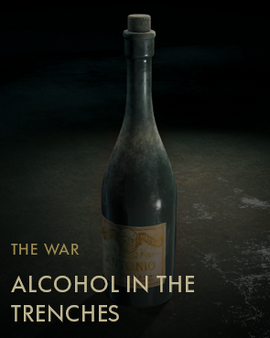 The presence of alcohol in the western front trenches was as sure as rats, mud and disease. The British soldier fighting in the frontlines enjoyed a daily ration of rum which was 70 ml or 2.5 fluid ounces per man. Soldiers fighting on the front lines would be given this ration daily and it was given twice a week for those behind the front lines. Clever commanding officers knew how to use rum as an effective motivational tool, often giving men who were setting off on particularly dangerous tasks a double-ration to keep their courage going. Once Russia started mobilizing for the war, Tsar Nicholas II prohibited the sale and use of Vodka. A strong influence on this decision was the embarrassing behavior and lack of discipline shown by drunken Russian soldiers during the Russo-Japanese war of 1904-1905. The idea of drunk soldiers slogging down the mobilization must have been a terrifying thought for the Tsar but the prohibition wasn’t without its own problems, a significant loss of tax income playing a major part. On the other hand, Russia’s ally France would show a more relaxed attitude towards alcohol use in the military. While the French soldiers initially only enjoyed water in 1914, the army began issuing a daily wine ration in September that same year. The wine itself had many nicknames but the most famous of them was known as Pinard. It was a low-quality wine but loved by the troops nonetheless. A daily allowance of Pinard wine for the French soldier consisted of a 250 ml or 8.5 fluid ounces a day but this would grow larger with time as battles on the front intensified. For soldiers and officers alike, alcohol made the inhumane conditions of the trenches a little more bearable.

The most common punishment for soldiers who were caught drunk in the trenches or on duty was known as “Field Punishment No.1”. This consisted of the offending soldier being tied up to a post or a gun-wheel for 2 hours a day. The punishment would be issued by the commanding officer for up to 28 days but a court martial could award the soldiers with up to 90 days of punishment. The manual of military law stated that field punishment should never be applied in a way that would cause physical harm, but stories of abuse and soldiers being punished excessively was not uncommon at the time. January 1917 marked the arrival of new guidelines from the War Office on the punishment, including a watercolor sketch that showed how the expected punishment for field punishment no.1 should look like. It also provided specific requirements on the rope binding to hands and feet which would ensure that the punished soldier would not receive permanent harm.

Retrieved from "https://battlefield.fandom.com/wiki/Alcohol_In_The_Trenches_(Codex_Entry)?oldid=343378"
Community content is available under CC-BY-SA unless otherwise noted.