The Alpine War is a Codex Entry featured in Battlefield 1. It is unlocked upon obtaining all Field Manuals in the O Tutti Accoppati chapter of Avanti Savoia! in the singleplayer campaign. 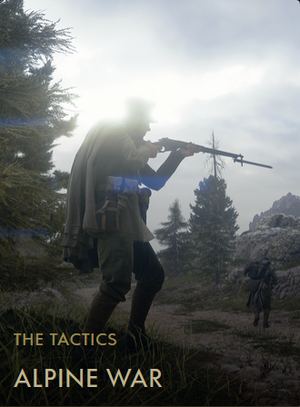 A mountain war between Italy and Austria-Hungary was fought in the extreme altitudes of the Alps and the Dolomites. Nearly 80% of the front ran through rocky mountain slopes and steep ravines covered by up to 12 meters of snow.

Mules brought up ammunition and supplies over narrow mountain trails, while field guns and howitzers were pulled up the steep ravines by cranes and ropes. Both armies had to construct roads, cable cars, and storage posts to supply combat zones up to 2km above sea level. Barracks and fortification not only housed the soldiers, but kept them safe from the freezing temperatures and icy winds.

The terrain favored the defender and even vastly outnumbered, they could hold out against attackers, who were unable to quickly advance over the steep passes. Marksmen took aim at the slow advance from elevated positions and mountain guns fired from concealed posts. Rock and splinters and flying debris caused terrible head wounds, and the defenders were able to start landslides and avalanches to sweep down the advancing enemy.

Both sides soon deployed specialized mountain infantry. Italian Alpini and Austrian Gebirgsjager were equipped with skis, climbing gear, and weather-resistant clothing to fight on the mountainous terrain and to endure the extreme climate of the glaciers.

Retrieved from "https://battlefield.fandom.com/wiki/Alpine_War_(Codex_Entry)?oldid=343386"
Community content is available under CC-BY-SA unless otherwise noted.