Battlefield Wiki
Register
Don't have an account?
Sign In
Advertisement
in: Incoming, Standard, Gadgets of Battlefield 1942,
and 8 more
English

Ammunition Boxes or Crates contain ammunition for firearms. They have appeared throughout the Battlefield series. They first appeared in Battlefield 1942 as boxes placed at strategic points in the field, typically at deployments and near objectives.

Starting with Battlefield 2, players (generally of the Support class) carry ammunition boxes as gadgets in their kit, and receive points for supplying teammates with ammunition. Players automatically restock their own ammo box over time. In some games, the player can carry the box with them to resupply while moving to an objective.

Each kit can only have one ammo crate out a time; if a new one is deployed the old one will disappear. Players can deploy multiple ammo crates by using dropped kits, or in games where specializations allow for additional crates.

In Battlefield 1942, ammunition boxes can be found at all flags, having a single one or multiple ones around the area. Once near one, it will gradually reserve ammunition, including gadgets like grenades and rockets. Only the weapon magazine currently in the player's weapon is not refilled; weapons must be reloaded for a player to have maximum ammunition again.

A render of the ammunition box.

In Battlefield 2, ammunition is dispensed either by the Ammo Bags from the Support Class or a Supply Crate deployed by the Commander. The Ammo Bags can be held to replenish the player's own ammo or those of others and they can be dropped as well. Supply Crates are typically requested by Squad leaders and supply ammo to any player within range of the crate. 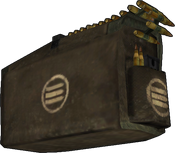 In Battlefield 2142, the Ammo Hub is issued to the Support class. It can be thrown on the ground to supply nearby teammates (and enemies). Holding the hub increases the resupply rate, though an "exhausted" hub cannot be thrown to the ground. A deployed hub will expire if its contents have been exhausted, enough time has passed, or it has received too much damage.

The Ammo Hub while held.

In Battlefield: Bad Company, ammunition boxes are spread out through Rush and Conquest maps. There is one invincible and stationary ammunition box for every single base. Once a player nears it, all of their ammo is immediately replenished, but a gun must be reloaded first to have a total replenishment. It also has a cooldown time, of around a minute, so a player cannot camp near one and expect to have infinite ammo.

An ammunition box in Battlefield: Bad Company (seen at Par for the Course)

Ammunition boxes appear in various places around the singleplayer campaign as two big green boxes filled with ammo and rockets. In the mini-map, they are represented by an icon of three bullets together. Unlike its multiplayer counterpart, the ammunition box can resupply all ammo, explosives and grenades in about half a second. They can be useful for the player when they are running out of ammo while doing various tasks such as destroying vehicles or participating in a big firefight.

"Filled with various calibers of ammunition, this bullet box is deployed functioning as an ammo point enabling soldiers to re-load and re-stock their ammo supply."

The ammunition box is unlocked for the Assault class once a player achieves 1400 points with that class. Once placed, it will resupply teammates within 3 meters one magazine at a time. The Medic's LMGs resupply 25 rounds at a time. The M249 SAW, Type 88 LMG, and MG3, however, resupply 50 rounds at a time. The ammo crate can resupply a total of 10 times at intervals of 1.5 seconds per individual player. After 10 resupplies, the crate disappears. The crate will still exist even after the Assault player has died or even switched classes.

When a player is running low on ammunition, assault troops can see a semi-transparent icon over their head when approached; the icon appears as a group of three bullets. Players can also display this icon to assault troops by pressing certain buttons (Select on the PS3, Back on the Xbox 360 and Q on the PC), also causing their character to yell various messages such as, "I need ammo!" Unfortunately, since these in-game calls are made in the character's language, it will often not be in English. For players who cannot talk to their teammates, it may be difficult to request an ammunition box, and they may follow an assault troop while firing at them, knifing them, or shooting at them until they have thrown out a box.

The ammunition box continues to be used in the Vietnam expansion. Other than aesthetic differences, it is exactly as its base-game counterpart.The Ammunition Box is very useful when fighting in drawn-out, pitched battles as teammates will commonly be requiring ammunition after heavy fighting.

"This box contains extra ammunition for all weapons on the battlefield."

The ammo box returns in Battlefield Play4Free. It takes significantly longer to refresh a user's ammo supply, but also works in larger chunks, resupplying one magazine every few seconds. However, the Ammo Box training option greatly increases its efficiency, reducing the time taken to restore ammunition and increasing its amount of ammunition held and range. Also, two Ammo boxes can be deployed at once with the Advanced Combat Supply training option. It does not resupply grenades. 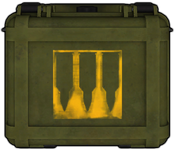 Ammunition crates are available at various spots in the campaign and co-op missions. They appear as larger versions of the ammo boxes seen in Multiplayer. Standing in front of the crate will completely restock your character's loadout.

Refills standard and explosive ammunition.
"The deployable Ammo Box refills ammunition for nearby soldiers. Explosives and grenades take longer to be resupplied than standard magazines. "

In Multiplayer, the ammunition box is a gadget, issued to the Support kit. Unlike the Medkit and Repair Tool, the Ammo Box will not be switched out for other gadgets—they will take up the slot for explosives, so the Support class will always have the Ammunition Box. Like Medkits, Ammunition Boxes can be tossed in or on a vehicle to create a mobile resupply point.

The ammunition box will supply magazines and shotgun shells quickly, explosives and gadgets moderately, and grenades very slowly. This limits the amount of grenade spam often seen in earlier games. However, the player can still spam grenades if there are many ammo boxes deployed in the particular area, as the resupply speed will stack depending how many ammo boxes are deployed.

In the Scavenger gamemode featured in the Aftermath DLC, an ammunition crate is available in a certain location, allowing players to quickly stock their current loadout. Aside from picking up other weapons, there is no other way for players to gather ammunition, as this mode (and Gun Master) does not allow ammo boxes or other gadgets. 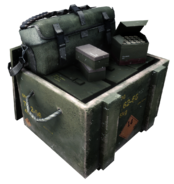 3D render of the ammunition box. 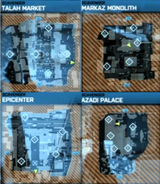 Refills standard and explosive ammunition.
"A crate filled with ammunition. All comrades nearby will start having their ammo cache restored for all their weapons and gadgets."

The Ammo Box is a gadget featured in Battlefield 4 for the Support kit. Functioning in a similar manner to past installments, Ammo Boxes allow players to resupply weapons and gadget once deployed.

1 box (SP)
"Deployable Ammo Box. Nearby combatants resupply ammo for all weapons, gadgets, and explosives. Anyone near the Ammo Box carrier can interact with him to resupply."

The Ammo Crate appears in Battlefield 1 issued to the Support Kit. Certain vehicle loadouts can also drop supplies consisting of an ammo crate and a Medical Crate.

The Ammo Crate resupplies all soldiers within its radius. Players carrying the Medical Syringe can restock this item faster when near an ammo crate, allowing for more teammates to be revived. Unlike the Ammo Pouch, the crate can resupply grenades. The crate can be destroyed by enemy players to prevent supplying.

Unlike previous games, ammo crates are placed at the user's feet rather than thrown. This may result in situations where a crate is not deployed because there is no space on the ground to do so.

Ammo Box on the ground.

The Ammo Crate is a gadget featured in Battlefield V, issued to the Support class. Similarly to the past installments, it will automatically resupply teammates that are within a 4 m meter radius when either thrown to the ground or the user is carrying it, a feature shared with Medical Crates. One may resupply themselves by interacting with the crate directly to pick up an Ammo Pouch and a spare gadget for each consumable type they carry.

Only one pouch may be taken from the box at a time with a cooldown of 25 seconds between resupplies. During the cooldown, The box will appear closed, Indicating it is unable to be used. Additionally, Ammo Crates do not resupply grenades which can only be done at Ammo Supply Stations.

Similarly to the Medic crate, players may use the Ammo Box as a support for bipods. They also appear on the minimap and as a 3D icon on the screen for all teammates.

Initial equipment
The Ammo Crate returns as an all-kit gadget in Battlefield 2042. It resupplies the player's primary and secondary weapon ammo, though only for the weapons' currently equipped ammunition type(s). (All consumable specialist gadgets automatically regenerate on an independent timer.) After using an ammo crate, a timer limits when the crate can be used again.

One throwable is provided, available for immediate use. It remains to be seen how many of a player's open gadget stock it restocks. At present, the only "stronger" ammo gadget is Specialist Constantin Anghel's Loadout Crate, requiring a full kit switch.

As with the Medical Crate, the range of these gadgets is now shown on field. This may potentially alert players at a distance (from both sides) that an Ammo Crate has been deployed, along with the traditional minimap icon.