Among Peaks of Kings is a Codex Entry featured in Battlefield 1. It is unlocked upon completing the singleplayer mission Avanti Savoia!. 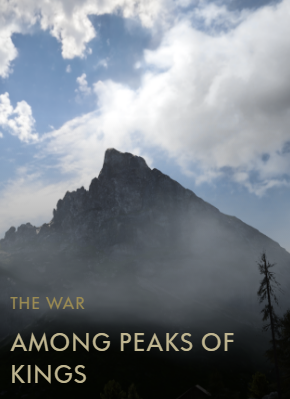 The front between Italy and Austria-Hungary was characterized by mountainous terrain, extreme alpine conditions, and a wide valley around the Isonzo River. High in the mountains, the Austrians fought defensively for most of the war. Situated in fortified positions on the Julian Alps, the Dolomites, and the Karst plateaus, they defied the advances of the Italian infantry. Camouflaged between rocks and positioned upon hilltops, machine gun posts and skilled Austrian marksmen could hold out against the more numerous Italian army, since the attacker had to make his way over narrow mountain paths, through knee-deep snow, and up open slopes. The effectiveness of artillery was limited and only small mountain guns could be transported to high positions, but shells and bullets created a deadly hail of sharp splinter wherever they struck.

Large fortresses overlooked the valley of the Isonzo, where 12 major battles were fought throughout the war. Over and over the Italian army launched costly attacks with massive amounts of artillery and infantry against entrenched positions, and only slowly pushed the defenders back, but German assault troops reinforced the Austrians in 1917 and at the battle of Caporetto in October they smashed through the Italian defenses, using poisonous gas and combined infantry and artillery tactics. That offensive finally slowed from exhaustion and the lack of supplies, and the Italian army managed to build up a new defensive line at the Piave river with the help of French and British reinforcements.

It was at that river that the final battle between the Allies and Austria-Hungary would take place in the fall of 1918, deciding the fate of the empire.

Retrieved from "https://battlefield.fandom.com/wiki/Among_Peaks_of_Kings_(Codex_Entry)?oldid=343432"
Community content is available under CC-BY-SA unless otherwise noted.