Battlefield Wiki
Register
Don't have an account?
Sign In
Advertisement
in: Standard, Section stubs, Kits of Battlefield 1942,
and 5 more

The Anti-Tank is one of the five kits featured in Battlefield 1942. They are armed with a rocket launcher, pistol (depending on the faction at hand), grenades and a knife. The rocket launcher can destroy medium tanks in three shots or less. It's ill-advised to take on anti-infantry duties due to the launcher's small splash radius.

In the Battlefield Vietnam World War II Mod, the Anti-Tank class returns with the exact loadout as its Battlefield 1942 counterpart; with the addition of an alterative class that comes with a Rifle and a Mortar.

The primary weapon of each Anti-Tank soldier is a submachine gun, with the exception of the DAO-12. Generally speaking, they are low-power, high-spread weapons whose effectiveness is limited to close-quarters.

The AT's gadget is an anti-tank missile or rocket launcher. With the exception of the RPG-7, all available anti-tank launchers are capable of being guided. Each one does heavy explosive damage, but the projectiles travel slowly and each AT only has a few rounds for it. Ergo their effectiveness against infantry is low, but against tanks, APCs, and other slower-moving vehicles the anti-tank launchers can be very potent.

Like the Assault, the Anti-Tank is additionally equipped with body armor, which decreases damage to the torso. However, it also reduces sprinting time.[1] 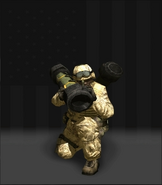 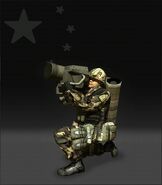 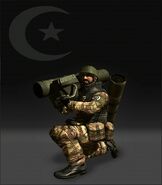 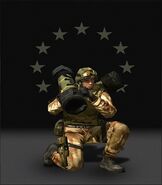 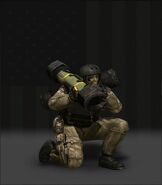 The US Navy SEAL Anti-Tank. 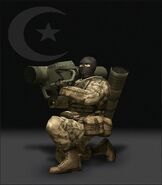 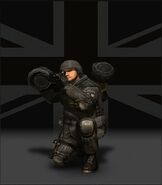 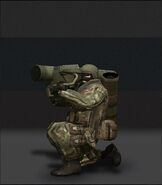 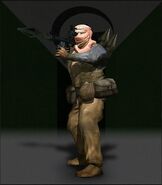 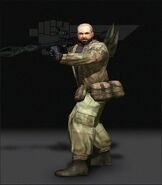 The Anti-Tank kit is featured in Battlefield Online.