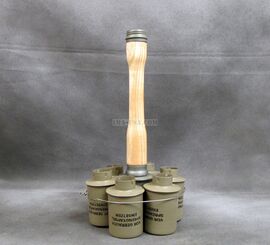 The Model 24 Stielhandgranate (German, "stalk hand grenade") was the standard hand grenade of the German Army from World War I until the end of World War II. The very distinctive appearance led to it being called a "stick grenade", or a "potato masher" in British Army slang, and is today one of the most easily recognized infantry weapons of the 20th century.[1]

The Germans were the first to come up with an improvised anti-tank grenade by taking a stick grenade and taping three or more of the explosive heads together in order to create a larger grenade and explosion. Known as the Geballte Ladung or "Bundled Charge", it was typically thrown on top of slow moving tanks where the armor was thin.[2]

Two kinds of Anti-Tank Grenade are featured in Battlefield 1.[3]

6 m
"This bundle of grenades will detonate upon contact with a vehicle to deal significant damage."

The Anti-Tank Grenade is a gadget available to the Assault, Tanker and Tank Hunter kits, for engaging armor at close range.

It inflicts moderate damage to armor, and can also destroy walls. Two grenades are provided. They can immediately damage armor upon impact with a vehicle (including a Horse), but also have a time-delay fuze and can deliver significant splash damage.

Will detonate immediately when hitting a vehicle." — In-game description

A Light Anti-Tank Grenade is available to all infantry kits as a grenade option.[4]. The Cavalry class also carries one as part of its kit. As it fills the grenade slot, Assault kits can carry it along with the larger Anti-Tank Grenade gadget for additional anti-vehicle capability.

The grenade is modeled after the Hales Pattern No 2 grenade Mk II, without its stabilizing cloth streamers. 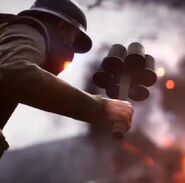 6 m
"M24 Geballte Ladung. This bundle of grenades will detonate upon contact with a vehicle to deal significant damage."

The Anti-Tank Bundle Grenade is a gadget featured in Battlefield V for the Assault kit. It remains functionally and aesthetically unchanged from its Battlefield 1 counterpart. Once thrown, the grenade features a similar time until detonation to the Frag Grenade.

Upon impact with an enemy vehicle or carefully aimed gunfire, it will immediately detonate. As with other gadgets, the Anti-Tank Grenade can only be resupplied at an Ammo Supply Station. Live enemy grenades can be thrown aside by pressing Interact near the grenade.

Throwing
Add a photo to this gallery

Retrieved from "https://battlefield.fandom.com/wiki/Anti-Tank_Grenade?oldid=366435"
Community content is available under CC-BY-SA unless otherwise noted.