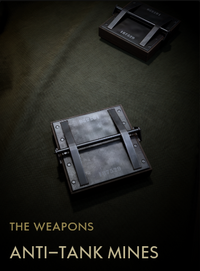 Developed as a countermeasure against the first British tanks towards the end of the war. At first, they were more like an improvised buried device consisting of a high explosive shell or a mortar bomb with the fuse pointing upwards. Germany later introduced the more purpose-built "Flachmine 17" that could be remotely triggered or detonated using a pressure fuse.

Records show that mines were very effective against tanks during the Meuse-Argonne Offensive, where 15% of all American tank casualties were due to the AT Mines.

Retrieved from "https://battlefield.fandom.com/wiki/Anti-Tank_Mines_(Codex_Entry)?oldid=343173"
Community content is available under CC-BY-SA unless otherwise noted.