Arab Revolt is a Codex Entry featured in Battlefield 1. It is unlocked upon completing the singleplayer mission Nothing Is Written. 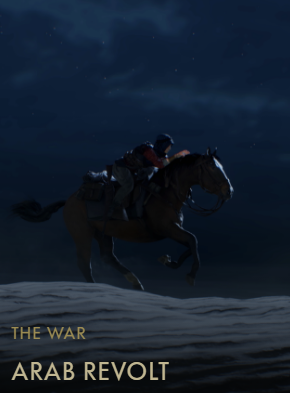 The Arab Revolt believed that most of the Arabian lands were held together purely by the military force of the Ottoman Empire and its bureaucracy, which existed to suppress and stifle regional autonomy. For many people outside the major cities of Damascus and Aleppo, for example, the term "Syrian" was unknown. Most smaller towns and villages defined themselves by their families, their beliefs, and their common culture, less by national constructs and artificial borders.

Hussein had the dream of a unified pan-Arabian empire, including Palestine, the entire Arabian Peninsula, Mesopotamia, and Syria. In his mind, a powerful Arabian caliphate would be strong enough to withstand the economic pressure of both European and Turkish enterprises and keep the benefits of the rich oil fields for the Arab people.

For military aid, he would grant the British special preference in future commercial deals. The British agreed that they would support the Arabs, since they could harass the Ottoman in their own backyard, drawing their attention away from British defenses in the Suez Canal and advances on Baghdad.

The British would provide the revolt with the might of a heavy Egyptian field battery, machine guns, more than 100,000 pounds worth of gold, and 5,000 rifles. Additionally they would send T. E. Lawrence, to accompany the Revolt and provide strategic advice.

Retrieved from "https://battlefield.fandom.com/wiki/Arab_Revolt_(Codex_Entry)?oldid=343430"
Community content is available under CC-BY-SA unless otherwise noted.