The Webley-Fosbery Self-Cocking Automatic Revolver was a semi-automatic revolver-style handgun designed by Lt.Col. George Vincent Fosbery and produced by the Webley & Scott company from 1901 to 1924.[1] The weapon, recognisable by the zig-zag grooves on the cylinder, was chambered in both the British standard .455 Webley cartridge (with a 6-shot capacity) as well as .38 ACP (with an 8-shot capacity).

It used the muzzle energy of firing a bullet to both cock the hammer and rotate the cylinder, unlike regular revolvers where this is either done manually or via pulling the trigger, which can disrupt shooting and reduce accuracy. Although this flaw was eliminated in the Fosbery system, the revolver—intended originally for use by cavalry—was officially rejected due to its weight, unwieldy length, expense to produce, and complexity. Some privately purchased examples saw service in the Boer War and subsequent World War I, but was found to be generally unsuitable for battle conditions due to frequent jamming and unusual two-handed recocking technique. Around 5,000 of these weapons were produced in total.

This item has a Codex entry: Auto Revolver

"Popular with British officers who could pick their own sidearms, this revolver utilizes recoil to rotate the cylinder and cock its hammer after every shot."

The Auto Revolver is a sidearm that appears in Battlefield 1. It is available for the Medic kit in Multiplayer.

The Automatic Revolver .38 is first seen in use by all members of the tank crew in the War Story Through Mud and Blood, with the exception of Daniel Edwards, who uses a radium-sighted C96, and Finch. It is also the starting weapon for Clyde Blackburn, the weapon of choice for T. E. Lawrence, Ahmed, George Rackham, Wilson, and can be equipped by Zara Ghufran in the War Story Nothing Is Written.

The Auto Revolver fills the role of high-damage, low rate-of-fire handgun for the Medic kit. It features a two-shot kill potential at close range at the cost of high recoil and a small magazine size. It has fair hipfire recoil for its power and also reloads quicker than all other class-specific revolvers with its break-action ejector and speedloader. However, like all other sidearms, it suffers from extreme damage drop-off at longer ranges. Unlike previous games in the series, it cannot one-shot kill with a headshot, but it will do upwards of 90 damage at close range, making the target vulnerable to a second shot or a melee takedown.

The Auto Revolver with no bullets.

Inserting new bullets in with a Speedloader

Pulling back on the Hammer 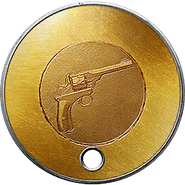 Auto Revolver in first person in Nothing Is Written.

Ahmed aiming his revolver at Tilkici.